Once upon a time, there was this girl who had an off-week. Nothing about the week was routine. She only got in 2 runs instead of 3 and lunches were not what they should have been. There was a random overnight stay at the Portofino at Universal Studios with her hubby. They had a great time and were up at the crack of dawn on Friday for a radio broadcast and then rode the new Transformers ride. It was a great time. The next morning, this girl went to Weight Watchers to weigh-in, full well knowing that the scale would be up. And she was right. Regrets? No. But she is ready for a week back on routine. The end…. 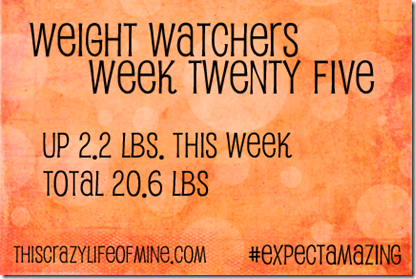 A 2.2 pound gain…. Life happens, there will be weeks where everything will be far from routine. So, I own this gain and now I move on!

Things I did right this week are:

What I will focus on this week:

The good news is, this week I earned more activity points than I did last week. The bad news is, it’s still not where I should be. This new week will be better.

I am looking forward to the weekend with hubby. We went for a run this morning and went for coffee. We’re going to donate our old dryer to the Humane Society of Pinellas County and drop off some chicken broth as they’re in need of for the hot summer months. And today is hubby’s birthday – happy birthday honey!! That means we’ll be going to Kobe’s Japanese Steakhouse, which is his favorite birthday dinner. Tomorrow, I hope for another run and a quiet day at home. That would be fabulous.

Have a great weekend!