Some of you may know, some may not, that hubby has a blog also. He started it back in June and it’s about paintball. Hubby LOVES paintball. He plays once or twice a month, but would probably play more if time and money allowed. He started his blog in hope of sharing the sport he loves with other people, directing his posts to mostly first-time players as they get into the game. 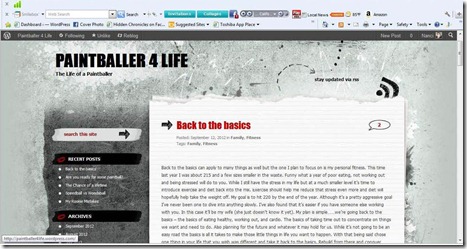 The other day, hubby wrote a post that I thought was fantastic. The post is titled Back To The Basics. I hope you’ll pop on over and read it. Hubby and I live in a crazy busy world. He works long hours, and is on call 24/7. He leaves between 6 and 6:30 in the morning and comes home anytime between 5:30 and 7 at night. By the time he gets home, he’s done. Done with a capital D. I totally understand that. But, my dear hubby wants to change that and I love that he included me in his desire to change. He wants to get back to the basics of eating healthy and working out. And even better, he wants to do it together. I love that.

When we first moved in together we would go to the gym together several times a week. We were so good about it, even driving from Clearwater to Tampa to work out. Eventually we switched to a gym in Clearwater. We each did our own thing, but it was quality time going and taking care of ourselves.

Over the years, life has gotten in the way of that. We bought a house and we’ve both taken on different responsibilities and our work days have gotten longer. The last 6 years have been HARD.

We switched gyms a few times. Currently I don’t have a gym membership, but he does and he has little to no time to use it. These are the things we need to change. It is rare and random that we go for a walk together, but when we do we are reminded how much we enjoy that extra time together. There is something about working out with your significant other.

I look forward to us coming up with a plan and getting back to back to basics together. I believe that together, we are stronger. Love you, honey!

Do you work out with your significant other? How do you make time at the end of a long day to get it done?

2 thoughts on “Together we are stronger”