Today was my second half-marathon and I still can’t believe I did it, again. What a great day it’s been, starting at 3:55 this morning when I crawled out of my nice warm bed to start the day.  I had the alarm set for 4:00am but woke up before. And a funny note, I set two alarms because I have a fear of one not working or something that would cause me to be drastically late. And I do not like to rush before an event.

When I woke up this morning, my first thought was that there was no way at all I was going to finish this half-marathon. I felt like I was absolutely crazy for even trying it. but I quickly pushed those thoughts aside and got ready.

If you follow me on Facebook or Twitter, you may have seen the picture of the Nike shirt I bought yesterday…. If you didn’t see it, here it is…. When I saw it, I had to buy it. 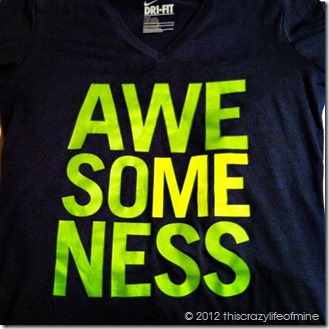 I had every intention of wearing it, but when I was getting ready this morning, I decided I should wear my Women’s Half tech shirt because it was super comfortable and nice and loose. I wanted to be as comfortable as possible. I had an English muffin with peanut butter for breakfast which was nice and filling.

Hubby and I were out the door by 5:15am to head to downtown St. Petersburg and we got there in plenty of time. We parked and walked a short distance to the start line. it was still very dark and it was cold and windy. This seems to be theme for all races I’ve run – cold and windy. But I will take that any day over hot and humid. 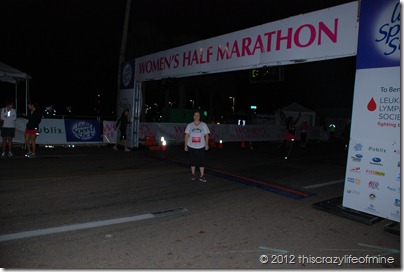 After a quick stop at the port-a-potty, a banana, and some water, we headed to the start line and I made my way to corral 5. When I signed up for this, I estimated my time at 3:15 which put me in the last corral. I’m fine with starting in the last corral, I won’t get in anyone’s way. 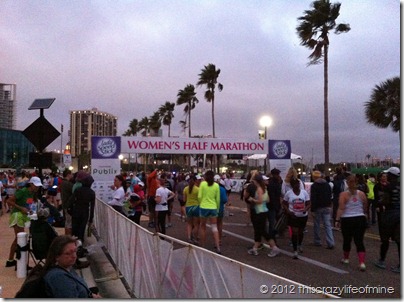 I made it to corral 5 with about 10 minutes to spare before we heard the National Anthem. I snapped this picture of the pretty palm trees lining the street. Despite how dreary and gloomy it was, it was still so pretty. I really like downtown St. Petersburg. 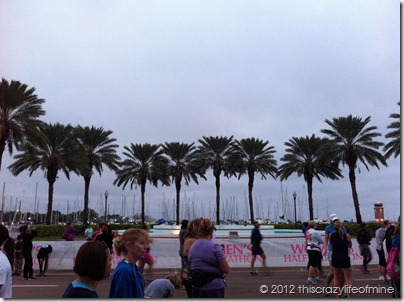 Before we knew it, it was GO time! It took just a couple minutes to get to the start line after everyone else took off running. I forgot to start my Garmin but decided I would make up for it along the way. I figured out that I didn’t start it until about an 1/8th of a mile in. 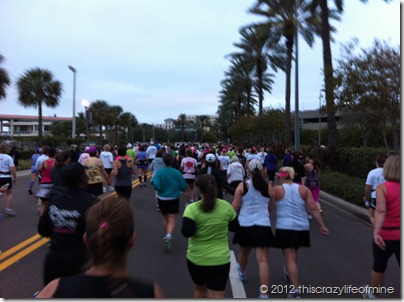 I started off walking and would run when I felt like it. I did not want to do anything to hurt myself or push too hard. Originally I had a goal of beating my time from my first half, but when I started dealing with my sciatica and I thought this would be out of the question, it became all about being able to finish it, if I was going to do it at all.

The first couple miles took us north and along North Shore Blvd. towards Coffee Pot Bayou. I love that neighborhood. It is so pretty. When I grow up, I want to live there. It was fun to be there again, as it was the same route as Day 3 of the 3-Day just a few weeks ago. It was also about this time that I saw the first runners pass us by… So so far ahead of me and I was so impressed by them.

I get so emotional when I do an event like this. More than once, I found myself crying. I don’t know why I do that. SO many emotions go into something like this. And today was no exception. For me, it’s all mental. The first couple of miles those thoughts of not being able to finish kept popping in my head and I was starting to believe them. Once we finally crossed over the bridge over Coffee Pot Bayou, something clicked and I felt really really good. I was running and walking and it was fun to pass some of the other runners and everyone just seemed in really good spirits.

When I hit Mile 4, I texted hubby to let him know. He seemed impressed, which boosted my self-esteem even more and I kept plugging along with a little more spring in my step.

Miles 6 and 7 took us back the way we came along North Shore and we passed by the Vinoy again. I knew the Pier was coming up and quite honestly, I was dreading it. It’s a long stretch out and back and it was so windy. I knew once I got to the end and turned around it would be a little better with the wind at my back, but it seemed to take forever. 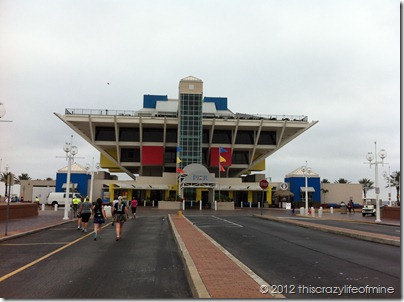 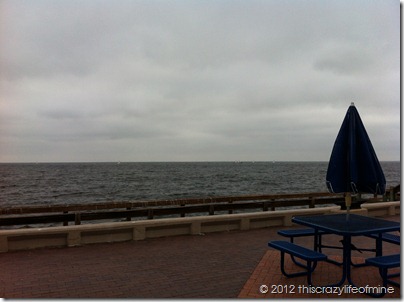 When I hit Mile 8 as I headed back out the pier, I texted hubby again to let him know where I was. He asked how I was doing and I told him I felt fine and that I was really warm. I was thankful that I did not wear layers as I almost did. I would have been miserable if I had.

Heading south again after leaving the pier, the course took us very close to the finish line and then west towards downtown and Tropicana Field. It seemed like I was doing really good with my time, all things considered. This was also where I switched to all walking. I could not run anymore. I was tired and I felt like pushing myself to run would not be good, and I was okay with that decision.

Miles 9 and 10 took us north again and around Mirror Lake. It was here that I saw the funniest sign of the day. I wish I had taken a photo of it. It said “Run like it’s Black Friday at Wal-Mart”. HA! I told the guy holding it how awesome it was.

We looped back around and headed to Tropicana Field, hitting Mile 11 just before we turned in the parking lot. The course actually took us into Tropicana Field. I thought it was very cool but I did not like walking on the artificial turf. 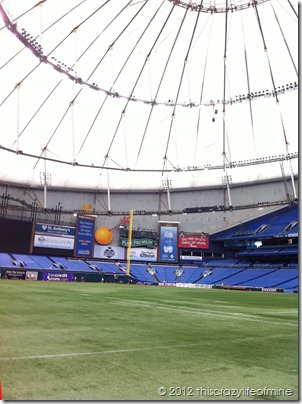 Leaving Tropicana Field we finally headed back in the other direction. It was about this time that I was ready to be done. SO ready. The closer I was getting to the finish line, the farther away it felt. When I hit Mile 12, I texted hubby. My exact text read “12 – last effing mile”. I knew he would be amused, but I meant it. Mile 12 was the longest. When I finally took the last turn and saw the Finish Line, I was so excited. I already knew I was going to be about 25 minutes off my previous time. I could hear the cheering as I neared the finish line and I kept my eyes open for hubby who I knew would be somewhere nearby. These are my favorite photos of the day, as I made my way to the finish line. I was bummed that I didn’t run the last little bit, but I just didn’t have it in me. 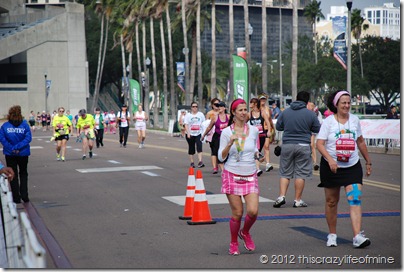 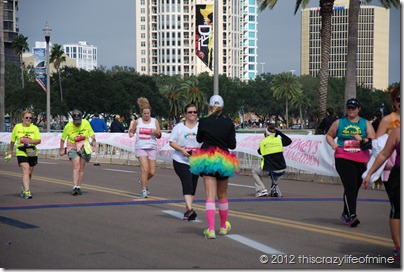 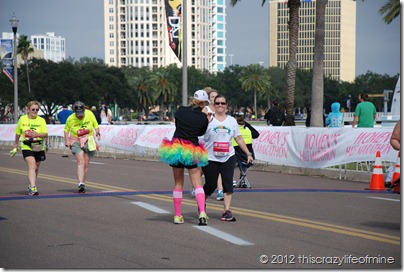 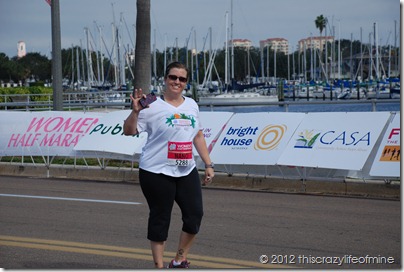 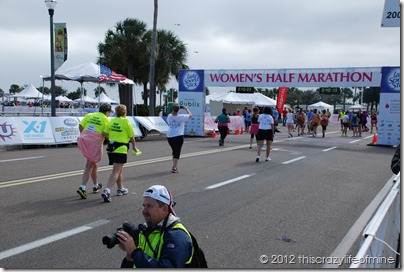 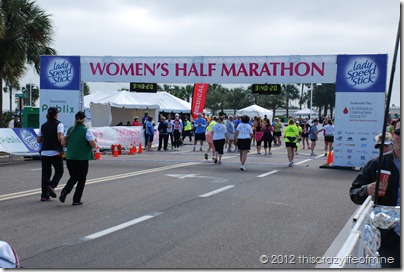 My official time was 3:27:11. My Garmin was just a couple minutes off. After crossing the finish line, I rounded the corner where I gladly accepted a bottle of water and my medal. I was so excited about that medal! A couple pictures were taken, and then I saw hubby. We laughed about my Mile 12 text and then he took a couple pictures of me with my medal. Have I mentioned how much I love that medal? It’s so Florida! 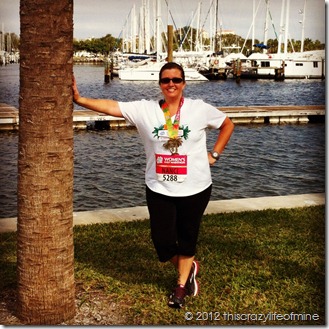 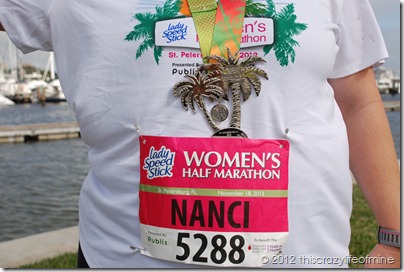 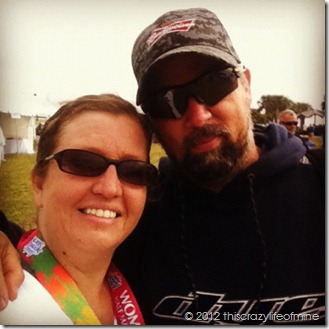 I am so glad that hubby was able to make it out there today. He thought I was crazy for doing this but he was also there to support me and cheer me on. Seeing him at the finish line made me smile and getting that hug and kiss afterwards made me feel special. He’s so good at making me feel special, and I know he was proud of me. Thank you, honey, for being there for me…. 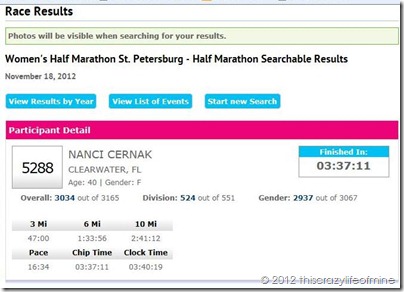 At this point, my legs were tight and my feet hurt, but I wasn’t in pain. Thank goodness! I was also HUNGRY. I already knew what I wanted and it didn’t surprise hubby at all. Off to Hooters we went! It was a nice lunch and the ice cold beer was so good.

Prior to today, I wondered if I would enjoy my second half-marathon as much as I did my first. I wondered if it would have the same effect on me or if I would feel different about it this time around. I can say now, that without a doubt, I enjoyed it just as much as the first. I laughed, cried, thought about everything and anything, sang along to my music, and knew that there were so many people thinking about how I was doing. I thought about how in February, I ran the Gasparilla 5+3K and how just last week, I did my first mud run, the Pretty Muddy. I thought about how I would be able to say that I’ve done not just one, but two half-marathons in one year. I thought about how not too long ago I could hardly move and that I would more than likely not be able to do the very thing I was out there doing. I was determined (stubborn) and fought to make it happen. I am so proud of myself for not giving up. I t doesn’t matter that it took me longer this time or that I had to walk more than run. All that matters is I finished it. That is the best feeling ever.

When I got home, I soaked in a hot Epsom salt bath – twice – and made myself comfy on the couch. I’m still sore and I expect I will be for a few days. Hopefully by Thanksgiving morning, I’ll be ready to do the Turkey Trot 5K Fun Run, which will be my last event of the year. I think….

Did you participate in the Women’s Half this year? What was your favorite part?