Gasparilla race weekend is probably my second favorite race event, just after the Rock N’ Roll Half Marathon. Tampa goes all out for it, putting on 4 races over two days… 5K, 15K, 8K, and a half marathon. Many people do more than one race over the two days – there are some that do all 4 races for the Michelob Ultra Challenge and earn an extra medal. They are my hero – I can’t imagine running 4 races over 2 days. Kudos to them!

I first did the Gasparilla 5+3K last year, finishing in 1:00:16. Considering that was only my third timed race ever, I did amazingly well. Going into it this year, I thought it would have been fantastic to beat last year’s time but I had a feeling that was not going to happen. I just went out there and did the best I could today. And did I mention that I started the morning off with a coffee BEFORE the race because we were up late last night for the Daughtry concert? I never have coffee for a race but it was required this morning. 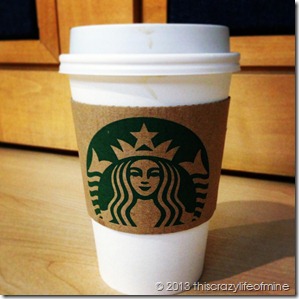 My hubby was also doing the 8K, as well as my friend Corinna and her son John-Evan. This was the first Gasparilla race for all three of them. We met up at the convention center early and headed to the start line shortly before 9am. Along the way, we snapped a few pictures in front of the foggy Tampa skyline… I thought for sure it was going to rain. 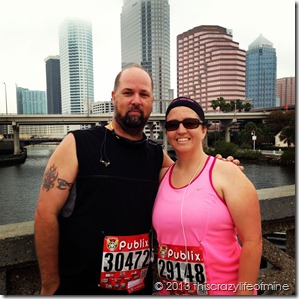 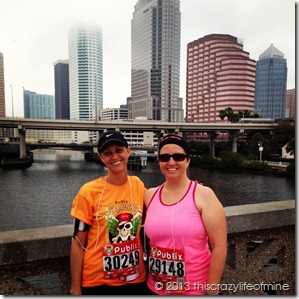 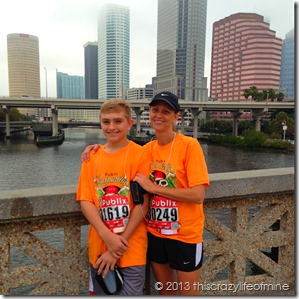 As we were getting ready to start the 8K, the half marathon was still going on and there were a lot of spectators watching. I caught a glimpse of all the medals… Gasparilla has great medals! 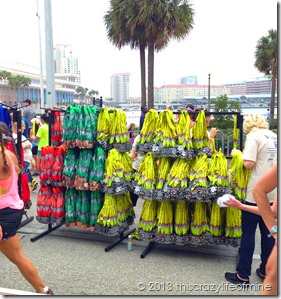 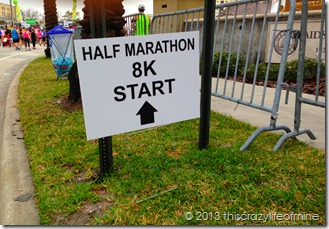 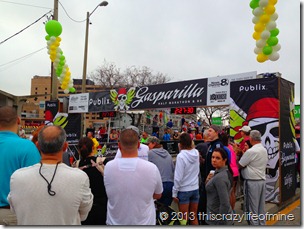 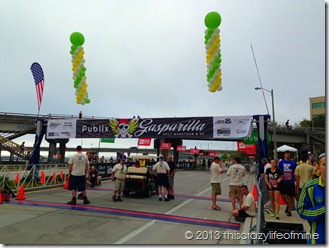 At 9:00, it was go time. The sky was still overcast but it wasn’t too bad. A funny side note… I had a new armband for my iPhone, I don’t usually use an armband but decided I better to protect my phone if it rained. Apparently when I hit play on my half marathon playlist, I hit repeat and it played the same song OVER and OVER again. It just happened to play one of the songs I added last night, Sweet Nothing by Calvin Harris featuring Florence Welch, so kind of new to me. I did not feel like messing with it because it really would have slowed me down. So I listened to the same song for my whole run. Go ahead, you can laugh.

I ran and walked intervals. My method is not by time. I am a very visual person and I set landmarks to run to… A sign, a light pole, a tree, a tent, whatever I see up ahead. It works much better for me than to go by time and keep staring at my watch. Hubby stayed ahead of my for much of the first half. When I caught up to him, we started running the same intervals and it worked out well.

As soon as we turned around and headed back the other direction, it instantly felt about 20 degrees warmer. I don’t know if it’s because we were closer to the water, the sun reflecting off the water, or the wind going in a different direction, but it was HOT. It was around this time that I knew without a doubt I would not do better than last year’s time. No way, no how. Hubby and I stuck together and ran when we felt like it and walked when we needed to.

I finished at 1:05:58, which I am happy with considering the heat. I was a hot sweaty mess but I felt great. It was fun to cross the finish line with hubby! We grabbed our medals and met up with Corinna and John-Evan who had finished a few minutes before us. My unofficial time on my Garmin…. 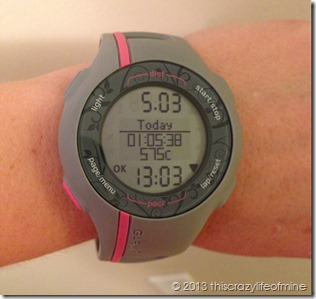 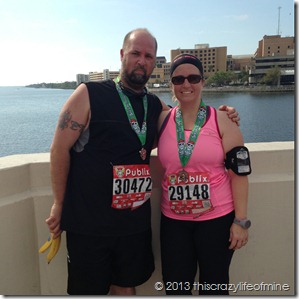 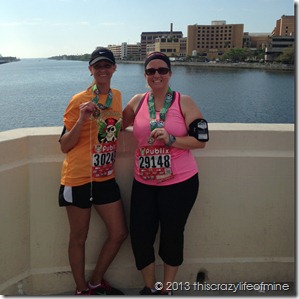 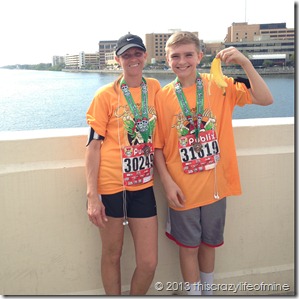 Afterwards, we all headed to Starbucks for our after-race treat. We certainly earned it. It was at this time that I noticed that all the lights were flashing on my WW ActiveLink. Not a bad day when you reach your activity goal by 10:30 in the morning!

Here are my official results….

And my fabulous medal… Thank you Gasparilla for another great event. I can’t wait to do it again next year! 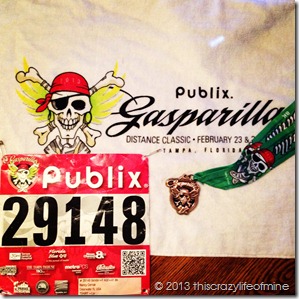 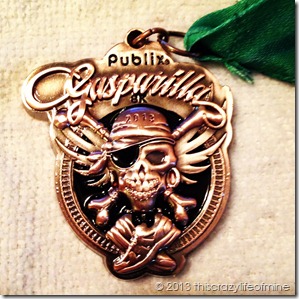 For my local readers, did you take part in Gasparilla race weekend? For everyone else, do you have similar events near you? What is your favorite race distance to run?