I can’t think of a more exciting way to spend the day before my birthday, the last day of being 41, than to run my 7th half marathon and PR! Last year, Best Damn Race was actually on my birthday and that medal will likely always be a favorite of mine because it has my birthday on it.

I did not train for this one like I did the Women’s Half back in November, but I was running 2-3 days a week and my pace has definitely been improving on those runs. Because of my lack of consistent training, I was hoping to finish in 02:30, which would not have been a PR but seemed like a safe time.

Our friend Mike drove in from Orlando to run this race, it would be his first. We arrived in Safety Harbor dark and early to find good parking and so he could pick up his packet. The rain had finally stopped sometime over night, which was great because it had rained here for three days. I even went to bed stressed about the fact that it was still raining. It was cool (50’s), muggy, and a little foggy, but NO rain when we got to Safety Harbor.

I finally met Jessica, who blogs over at Tampa Mom Runs. We met on Instagram when she bought one of running decals. It’s always fun to meet my “virtual” friends in real life! 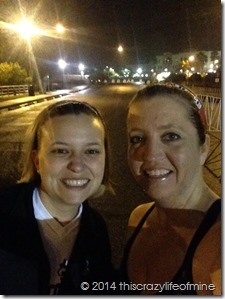 This year, Best Damn Race put up a PR bell for anyone to ring if they had a PR.  I walked past it before the start, thinking it would be nice to ring it but really didn’t see that as a possibility. The finish line was all set up, I was excited to cross that in a few hours! 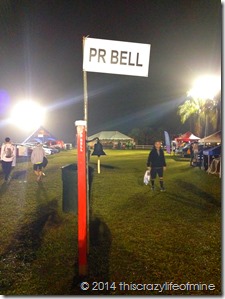 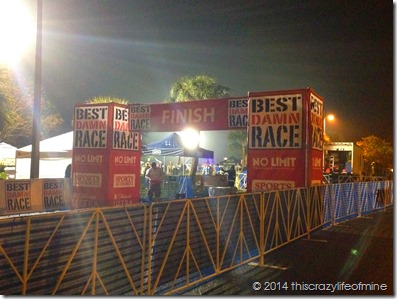 My friend Corinna arrived around 6 and we all met up near the start line. The amount of people there was insane. It was exciting to see so many people there to have fun in this event. 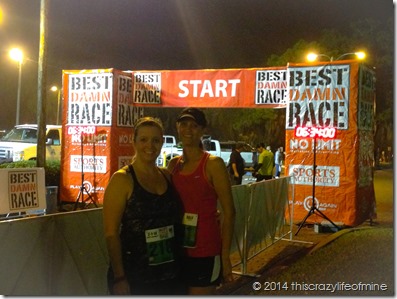 The 10K would start first, the half marathon second, and the 5K last. There was a delay in the 10K starting and I saw my friend Kat who was waiting to start the 10K. Kat is a huge inspiration to me. She blogs over at Katrina Elle I love to participate in her challenges, and she was ready to start running and hopefully earn a new PR (which she did!!!). 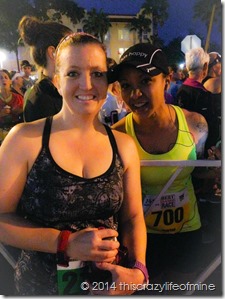 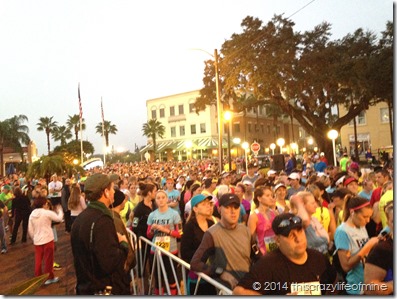 A few of the Best Damn Race Ambassadors met up for a picture before the start as well. It’s been fun getting to know them, they are all great ladies! 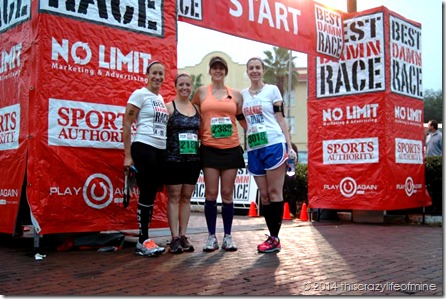 Haley and I had been hoping for cooler weather for this race. Warmer temps were momentarily expected for this day, so we were happy when it stayed a touch cooler, although we were not so thrilled about the potential for rain. Haley blog over at Running With Diapers. 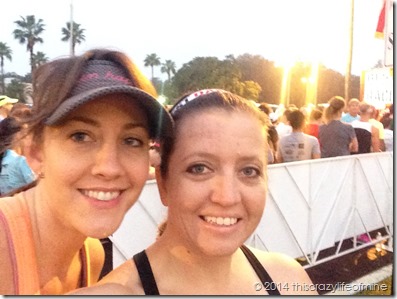 I also ran into my friend Carey as we were waiting for the half marathon to start. Back in November, Carey completed his first Half Ironman, something I just cannot imagine. I originally met Carey and his wife back when I trained with Jenna for the Susan G. Komen 3 Day in 2011, and now we have running and races in common! Carey is so full of energy – it was nice to see him! 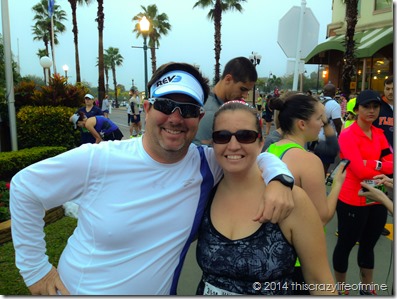 And finally, it was time to RUN!!! I was so ready to go. I’m not one to get nervous about a race, I just really excited and I am so ready to run by the time it finally starts. I haven’t been listening to music on my runs, so I chose not to listen to any for the race either. I have decided that the music that I used to need as a distraction is no longer necessary. I love getting lost in the run and I feel like without music, I am more tuned in to how I’m feeling, how I’m running, and my pace.

The course us from the Safety Harbor Spa north, into Philippe Park and then south to Bayshore Blvd. through a neighborhood near the trail, and then back on to Bayshore Blvd where the last turn-around was to head back to the finish line.

The first 6 miles actually went by pretty quickly. I felt good and decided that those little hills that kept popping up were a nice little challenge. I ran just about 4 miles before taking a quick walk break to drink some water and have a GU Gel. Once we hit Mile 7, I was wondering why I never knew that Safety Harbor had so many little hills! I heard two women talking about it next to me so we joked about it for a few minutes. This is also where I ran with my friend Val for a few minutes. Val competed the Dopey Challenge a few weeks ago. She is a rock star also!

Just about Mile 9, I started taking a few more walk breaks, This is also where I realized that it was actually possible that I could PR. I did a bunch of math in my head and figured out what I needed to do to beat my last half marathon time of 02:23:28. I am so darn competitive with myself… The minute I knew it was possible, I knew it had to happen. Had to. I was going to ring that PR bell!

As I approached Mile 12, I saw my friend Corinna and she was not happy. Her knee was hurting and she was walking. She ran the Clearwater Halfathon a couple weeks ago and it started bothering her then.

Finally, I rounded the last corner and I could hear the crowds and the announcer at the finish line. Approaching a finish line never ever gets old. I was a little sore but still felt good. Carey saw me and told me to finish strong. And that I did!

I also had a surprise when I crossed the finish line… My mom was there! I heard her calling my name and she was, of course, video taping me. She loves to do that. This video amuses me because I am clearly excited that I beat my time….

So. Exciting. I knew my fabulous new Garmin Forerunner 220 would be close because the mile markers were almost dead on with my watch. What I didn’t realize is how close it actually was…. 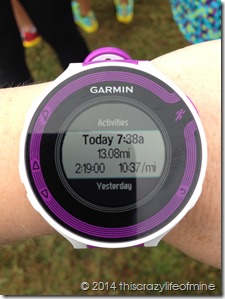 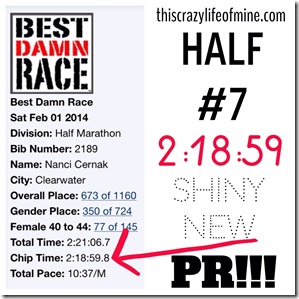 The usual post-race happenings took place from here on out… Pictures with my fabulous medal and ringing the PR bell! Funny story…. I went to ring the bell and the rope came off. The line of people gasped! I quickly fixed it, rang the bell, and moved on. It was awesome to see how many people were ringing that bell! 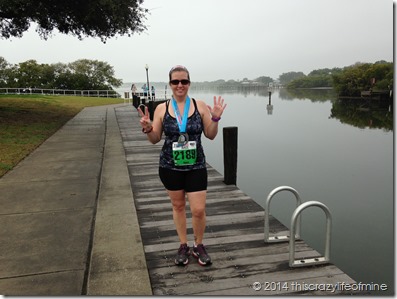 I stood in line for 20 minutes for an ice cold beer (totally worth it!), and looked for people I knew. Our friend Mike had finished just 3 minutes before me! Congrats! 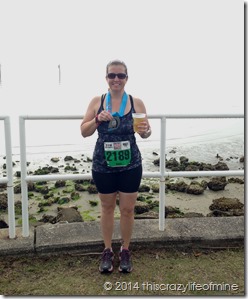 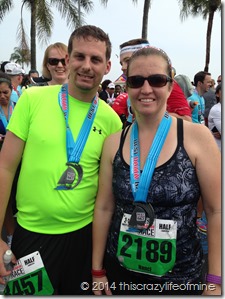 I chatted with Beth for a few minutes back at the finish line and saw Caitlyn, too. Corinna found me there as well and her and I did our finish line photos together. 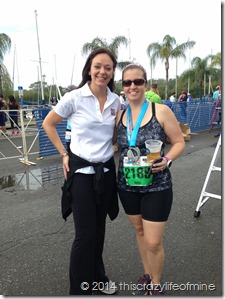 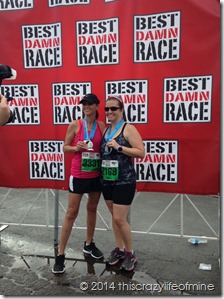 Here are my splits for this race. I was 20 seconds faster on my average pace than my last half marathon. It’s amazing how much that time adds up when you’re running. 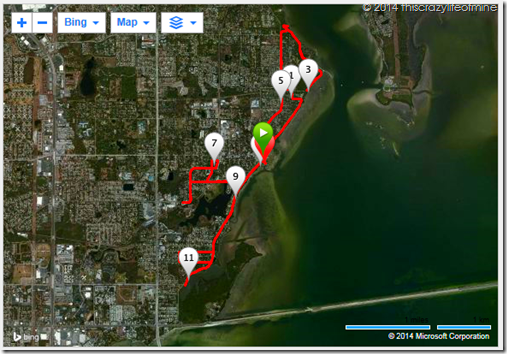 Another great race added to my list. It truly never gets old. This race I spent several miles thinking about my huge decision to run a full marathon this winter. And while it does scare the heck out of me, I also see it as a challenge that I am ready to take on. I’ve already come so far. My first 3 half marathons were all over 3 hours and look where I’m at now. I love the half marathon distance. It’s not easy, it’s a challenge, and is as much mental as it is physical.

Crossing the finish line and earning this awesome medal with a new PR was a nice birthday gift…. 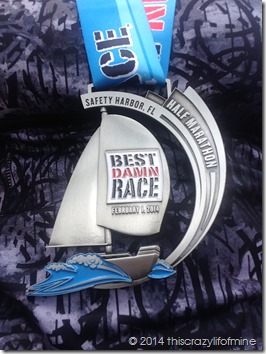 I’m going to run the half marathon at the Best Damn Race in Orlando on March 1st. Who wants to join me? You still have time to register here and save $5 using my discount code NANCIC.

What is your favorite part of a race? Let me know if you’ll be joining me at the Best Damn Race in Orlando!