What a great time! Or should I say, what a damn great time! The inaugural Best Damn Race in Safety Harbor was a great way to spend the morning of my birthday. I signed up for the 5K last year for two reasons – it was on my birthday and it was in Safety Harbor which is not too far from me. Last week, just days before the race, hubby decided he wanted to do the 5K as well. Within minutes of him saying he wanted to do it, I had him registered so he wouldn’t change his mind. Aren’t I a good wife?

Hubby and I arrived at 7:15, just as the half marathon was starting. The 10K had started at 6:30, so there were runners finishing up. The 5K would not start until 9:30, so we were early, but I was looking forward to walking around, watching runners finish, and looking at the gorgeous view of the water that I know and love in Safety Harbor. 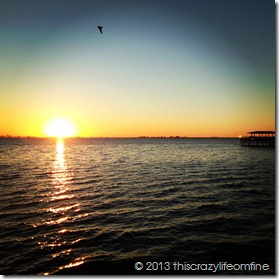 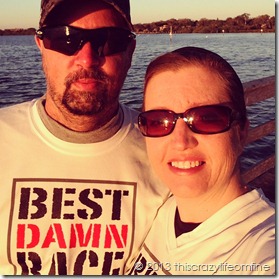 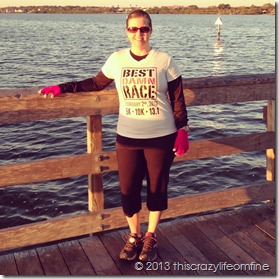 It was cold, a very crisp 43 degrees. It was reminiscent of the Is it legaly to buy accutane online last year, minus the crazy wind. I was so happy that I had my brand new gloves on to keep my fingers warm. I had a long sleeve Nike Dri-Fit shirt on under my race shirt. But the weather was amazing. I love a crisp morning like that. Perfect for running. I also knew that I would warm up once we started running. 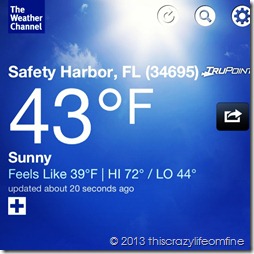 I was pretty excited to cross the finish line…. It was fun watching the 10K runners finish and we even saw the first finisher of the half-marathon… He finished in 1:13:50. So amazing. He could finish a full marathon in one it takes me to do just one half marathon! 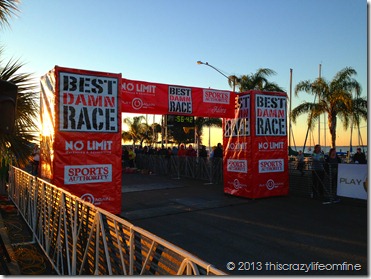 Before the 5k started, I ran into a couple blogging friends who I knew would be there. Yay for the Tampa Bay Lady Bloggers! Thanks to Facebook and Twitter, I knew who to watch out for from all the early morning talk about who would be there. First I saw Beth from Discom-BOB-ulated Running – she was volunteering and handing out medals at the finish line. Hi Beth! 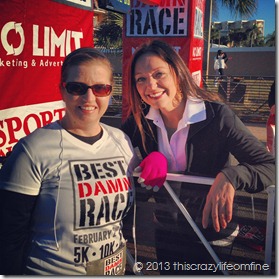 Then I saw Caroline from My Fascinating Life – she had just finished the 10K. She’s had hip pain the last several months and had to stop running. After following the Whole30 plan for almost a month now, her hip pain has been just about nonexistent. She’s working her way back into running. I am so happy for her! 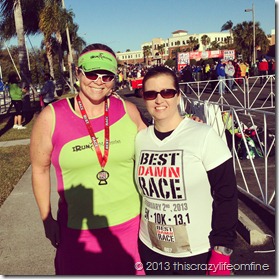 Just before the 5K started, I also ran into Debbie from Discovering Debbie. She was running the 5K also. Debbie is always full of laughter, I was happy to see her! 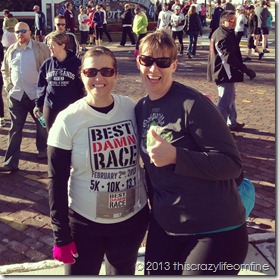 Finally, it was time to start… I was ready to run and warm up. We started near the back so the crowd could thin out ahead of us. I started out running and ran for a good half mile before walking. I did a lot of running with walk breaks and really felt great. I caught up to hubby a couple times and he was doing well too. There were a couple water stops along the way, perfectly timed. Before I knew it I was hitting mile 2 and I had definitely warmed up. I almost wanted to take my gloves off but I left them on. The view along the course was beautiful, much of it along the water. I wanted to take a couple pictures during but didn’t want to stop because I felt like I was making great time. And then, there was the finish line! I ran in and looked for hubby since I knew he had finished ahead of me. When I stopped my Garmin, I realized I had finished just under 40 minutes which for me is great. I hoped that my official time was close to my Garmin! 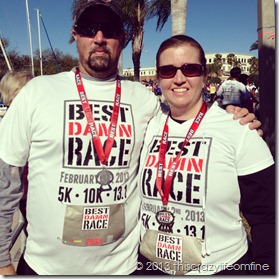 How cool is the medal? I was pretty excited to get my hands on it and add it to my others. I love that is has my birthday on it. And it’s a bottle opener!

Afterwards, we went to Starbucks so I could get my free birthday drink. All morning, I planned on having a hot drink to warm up, but I was so warm after the 5K, I ended up having a caramel frappuccino. I haven’t had one in so long, it was yummy. While we were waiting for our drinks, I looked up our official times on the Best Damn Race website and I was very excited to see that I finished 6 seconds sooner than what my Garmin said! 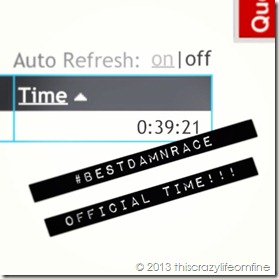 Hubby did great too, finishing in 38:25 for his first timed 5K. Yay hubby! All in all, this was a great race. Everything ran perfectly smooth, everyone was so friendly, and it was the perfect morning. I can’t wait to do this race again next year. Thank you to the folks at the Best Damn Race for a great time! And…. this puts me at 2 done for my #10in2013 challenge!

Did you run the Best Damn Race? What has your experience been running an inaugural race?

Leave a Reply to Debbie B. Cancel reply