Earlier today, a good friend from high school lost her dad to cancer. He has been battling cancer and spent the last few weeks at hospice. I have been checking in with her often to see how he was doing, and her as well. I have to admit that her experience and what she’s been going through these last few weeks has sent me back to the days I spent at the hospital with my dad and the rush of emotions I felt during that time.

A few days after her dad went to hospice, Leslie asked me how I got through things with my dad. I answered her honestly and told her I don’t know. I really don’t. Looking back on it now, 20 months later, I am actually amazed at how I did handle it and how I got through it. I spent 12-14 hour days at the hospital over a month’s time. The first two weeks he was in the hospital, he was more coherent but still very ill. The second two weeks, after being readmitted, he was mostly in a coma and very, very ill. But I had to be there. I could not be anywhere else. I remember one day during his first two weeks in the hospital, the day before he would come home. It was the only day that I did not make it up to the hospital and it drove me insane. I talked to my mom on the phone while she was at the hospital with him and he told her to tell me that he missed me and loved me. The one day I didn’t make it up there. The next day he came home, and the following evening he was rushed back to the hospital. Thank goodness I saw him and we spoke that morning. He would never speak to any of us again after that, with the exception of a couple times he woke up and acknowledged us. He couldn’t talk because he was on a ventilator, but he would mouth “I love you” and very much smile. It was the moments that kept me at the hospital every minute I could be there, in hopes that he would know we were there with him and that he wasn’t alone.

For my dad, we had to make the most difficult decision ever. After being in ICU with sepsis and pneumonia and on a ventilator for 2 weeks, we had to decide if we wanted the doctors to do a tracheotomy because it wasn’t safe to be on the ventilator much longer. He could not breathe on his own. He had put on 50 pounds in a matter of days after being admitted to ICU and had to have daily dialysis treatments. If there was any hope of him coming home, he would need extensive round the clock care, but the doctors were not at all optimistic.

When my dad had his accident in 1955 and ended up in a wheelchair, he had a tracheotomy then. You could still see the scar from it. We all knew that a tracheotomy would be the last thing he would want. After two very emotional family meetings with all of his doctors, and him pulling out his feeding tube his last night (which we took as a sign), we realized that a choice had to be made. He was so ill. So very ill. His last morning, we decided it was time. We had tried everything possible, we were not making hasty decisions. But it was hard. I did not like playing God. We surrounded his bed – my mom, me and my husband, my sister and brothers and their spouses, three of my mom’s sisters, and two of my dad’s cousins. We all held his hands and kissed his forehead. They took him off the ventilator, and it only took 12 minutes for him to pass. I knew we had made the right decision, but it did not make it any easier. I was numb and the saddest I have ever been in my whole life. To this day, I can remember every day at the hospital with him and what happened. It’s very vivid. But I realized the last couple weeks that I had put away some of those emotions, in a safe place. Perhaps that’s what we do over time when we go through a loss like that.

In hearing from Leslie about how her dad was doing each day, and how she was doing, going back and forth to hospice and wanting so much for him be at peace and not in pain anymore – well, it brought those feelings back. In Leslie’s case, she watched him decline each day. The little changes that would take place, and they waited. She told me he wanted them to live their lives and visit in the evenings. She wanted him to not be in pain anymore. These are all such selfless feelings.

I still wonder what my dad thought in his last days. Did he think about the fact that he was leaving us? Did he wonder how we would all be with him gone? We will never know the answers to this, but I hope that he did not worry about us and know, in his heart, that we would be fine. He was the center of our lives and in the end we were all there with him. I can’t think of any other way to see a loved one leave. We all put our pain aside to be there with him. To me, that is a beautiful thing.

One thing I would tell Leslie now is that there is no wrong way to grieve. We all grieve differently and you have to deal with it head-on. There were days that I cried and cried. You have to let yourself cry and face those emotions. And there were days that I would think of something and it would make me smile. 20 months later, the happy memories and thoughts outweigh the sadness. I still have them, and I still cry, but I also laugh and smile about memories I have of my dad – the stubborn Italian that he was.

Here are some recent photos of Leslie (right) and her dad Donnie, along with her good friend Dawn (left), who thought of him as a second dad. These pictures were taken not long ago by Dawn’s sister before he became very ill. I remember years ago, he would pick on me, and was always laughing. He was such a character. That is how I will remember him.

Today, I am keeping Leslie and Dawn, and their families, in my thoughts as they go through this difficult time. Rest in peace, Donnie, aka Pops. You have very good company up in heaven with my daddy. 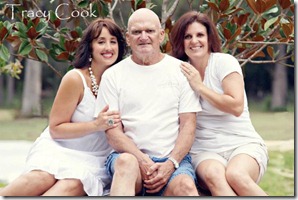 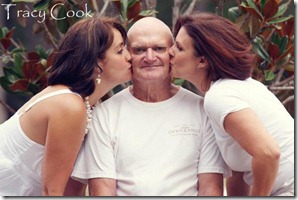 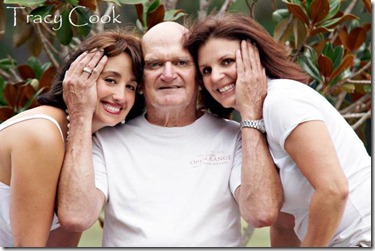 6 thoughts on “On loss and grief…”