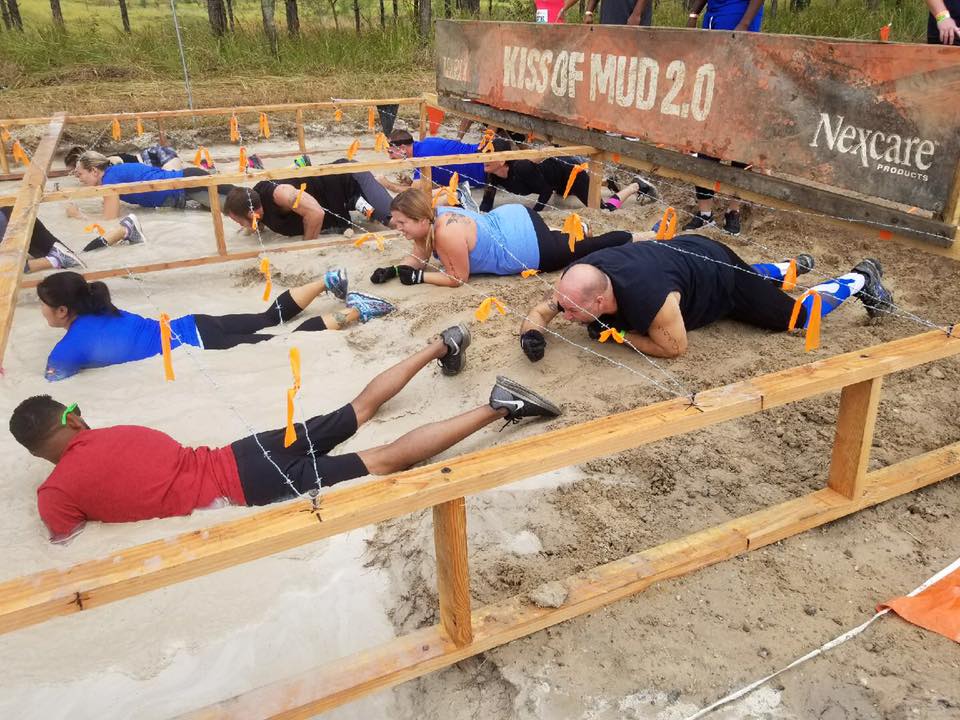 Thanks to Tough Mudder, I recently had the opportunity to run the Central Florida event in exchange for social shares and love. All opinions are my own…

What are these, you ask? They are obstacles at Tough Mudder. And this past weekend, a group of 7 of us tackled it, at least a good portion of it.

I’ve done a 5K mud run before with obstacles, but nothing like this. And when we signed up, we bypassed the Half option of 5 miles and went straight for the Full option, which was 11 miles. Hey, why not? If you’re going to step out of your comfort zone, you may as well REALLY step out of it.

Thanks to the folks at Tough Mudder, I was able to join three people of my choosing to do the Central Florida event last Saturday in Bartow. Out in the country, which I always seem to forget we have here in The Sunshine State, we drove miles and miles out to Clear Springs Ranch. Set up in the midst of a ranch with cows and all, we were ready to attempt 11 miles of obstacles. 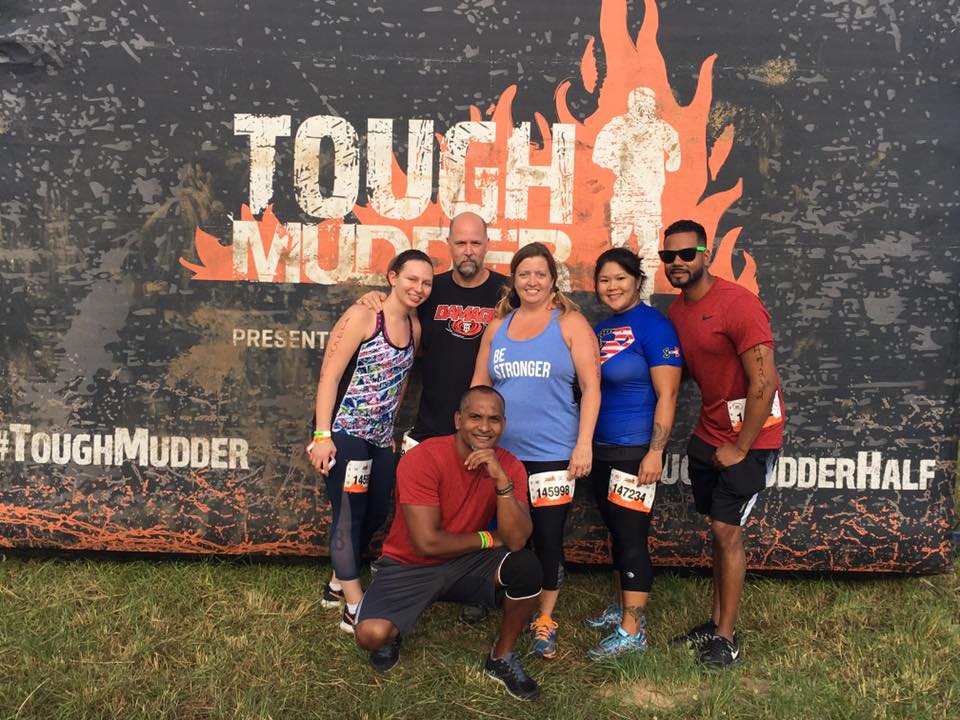 My husband and our friends Heather and Erika joined me as well as a few of our brave gym friends Lan, Ralph, and Nikolai. Heather, Lan, and Nikolai have all done Tough Mudder before so they were the Legionnaires of the group. 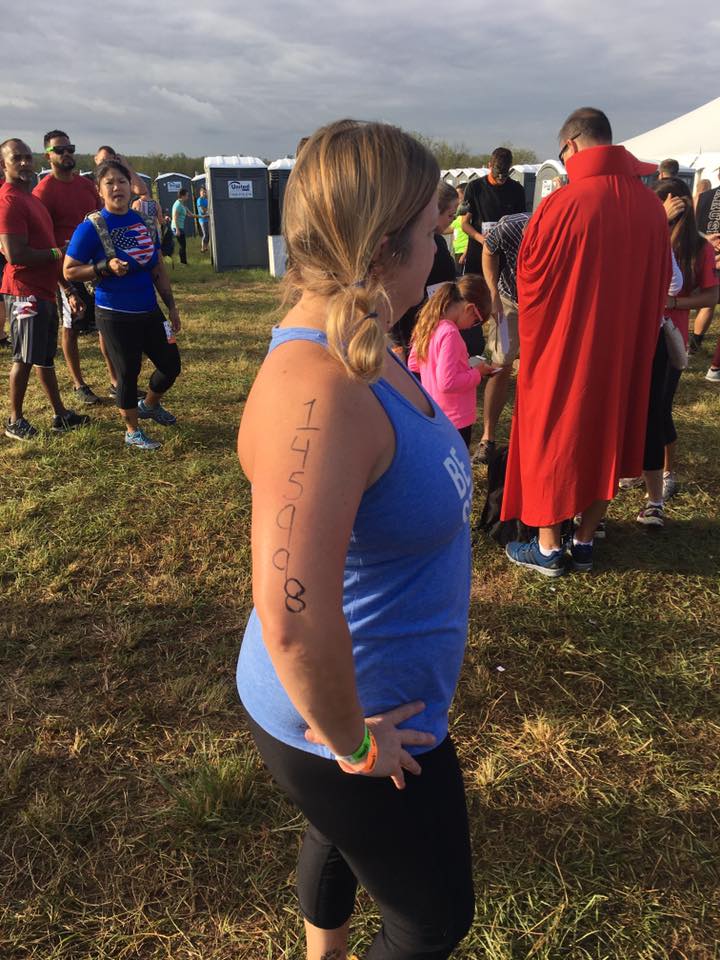 Being a runner, I was not afraid of the 11 miles. The challenge for me was the obstacles. I had been studying them online and everytime I looked at one, I asked myself what the heck I was doing. Had I not been working out and doing bootcamp since January, I never would have attempted such a thing. But I’ve gained upper body strength that I have never had before and the nerve to attempt something different.

We all started out together, running the first mile to the first obstacle, Kiss of Mud 2.0. Crawling through mud under barbed wire is pretty fun and I felt good about it.

The second obstacle was Devil’s Beard, which is a very large net that you crawl under until you get out the other side. Of course it’s dirty and the ground is hard, but it’s still fun.

Third was Berlin Walls, a 9′ 6″ wall to climb over. This is one of the obstacle types that had me worried. First, I’m afraid of heights. Second, while I know I’ve gotten stronger this year, climbing is still not my thing. Thankfully, hubby was right by my side and told me I could do it. I climbed over first with his assistance and then he climbed over, helping me down the other side. Had he not been there, I don’t think I would have attempted it but I trust him a million times over and know that he help me and not let me get hurt. I love our teamwork on this obstacle!

Next up, King of the Mountain. This involved climbing up hay bales stacked high. Really high. Again with the climbing… Being short makes this difficult. I don’t have long legs to help me up these obstacles. But, with hubby helped me up and over. 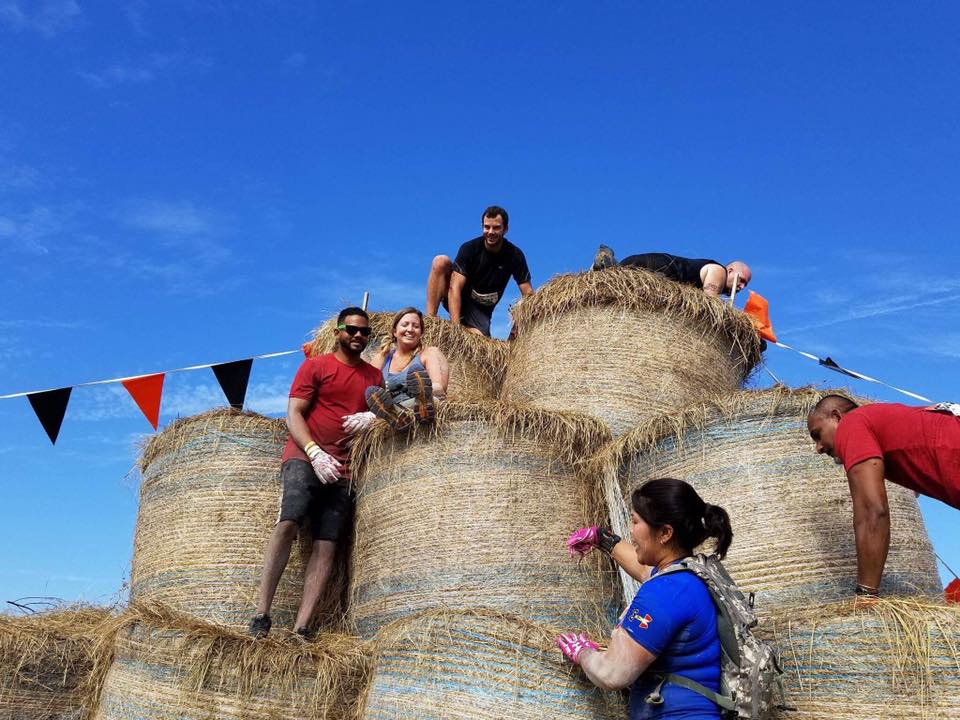 Our next obstacle was Quagmire and that meant more mud. Basically one big giant mud puddle. The kind your shoe gets stuck in and your foot wants to come right out of your shoe. The ground is uneven, you don’t know where you’re walking. Oh, and the water was on the chilly side. 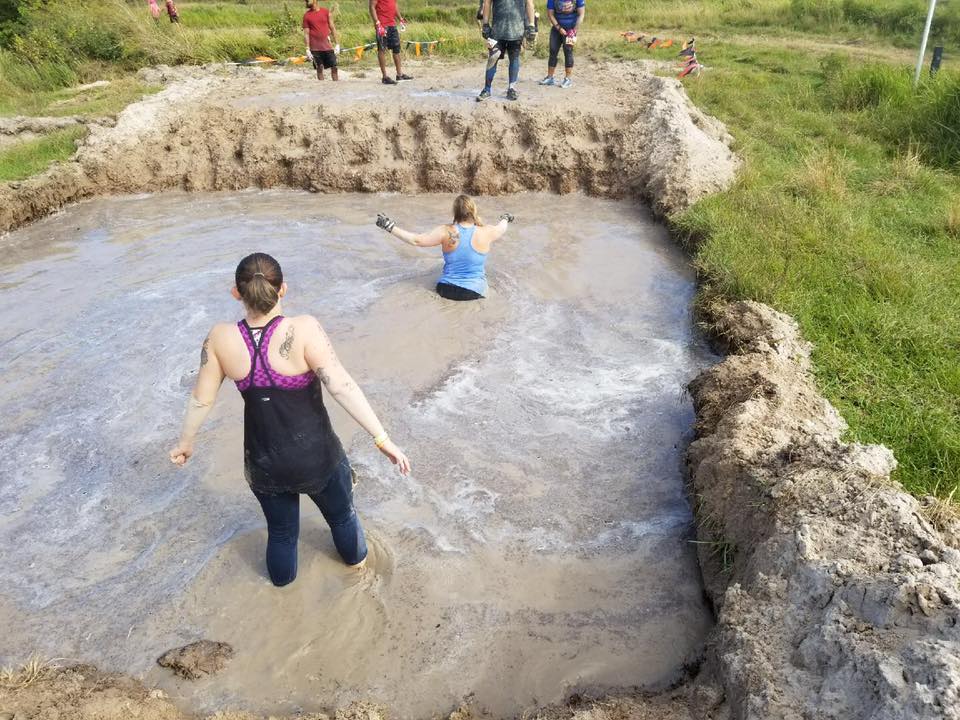 Shawshanked came up quickly after we rounded a sharp corner. Walking up to this one, I saw barbed wire to crawl under in mud and tubes to climb up inside of at an angle. I never stopped to think about what was at the end of those tubes. I crawled under the barbed wire, watching other people ahead of me. Hubby had me go ahead of him, and I went up the tube face up, pulling myself up the rope inside. All I could think about was how proud I was that I was pulling myself up this tube on a rope despite my feet slipping and losing ground. I was mentally thanking Gold’s Gym and Greg for being able to do that. Then I got to the top and realized, I had to jump into water to get out.  I was stuck – literally. The tube was just not big enough to let me turn around and get my legs out first. I DID NOT want to fall out backwards. This girl can’t swim and falling backwards is not my thing. One of the Tough Mudder folks was on top of these tubes, talking people through it and came over to me. She told me how to pull myself up and use my upper body strength to hold on while I let my feet drop out. Or I could just fall out backwards. Nope, nope, NOPE was my response to that. You can tell that this one made me nervous and once I finally got out of the water and walked it off, I started to question what the heck I had gotten myself into. We weren’t at mile 3 yet and I was already tired from what I had just done. 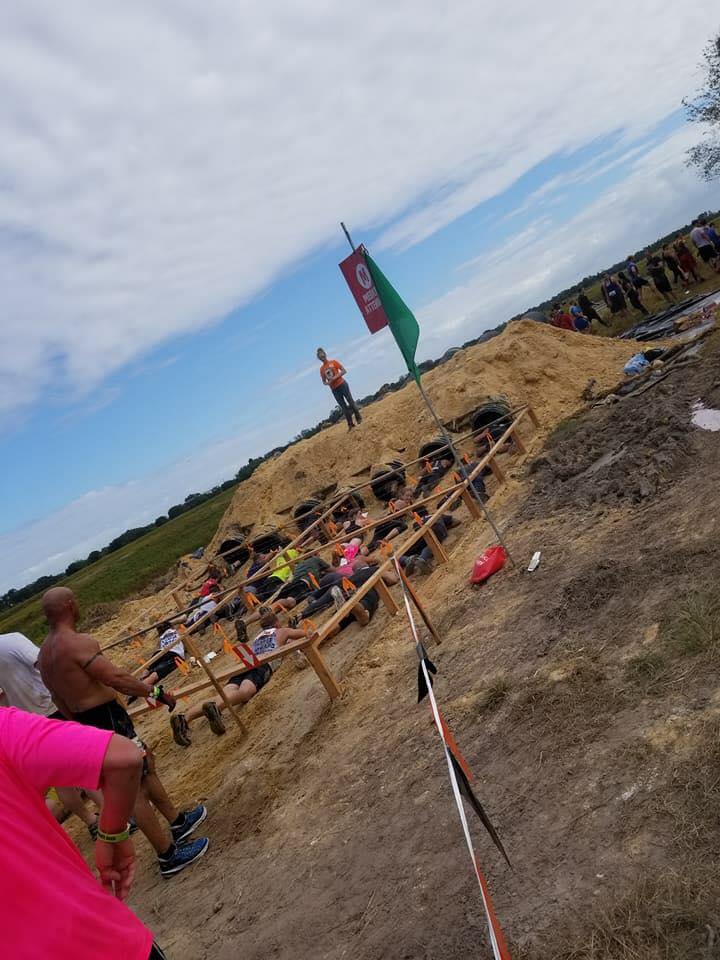 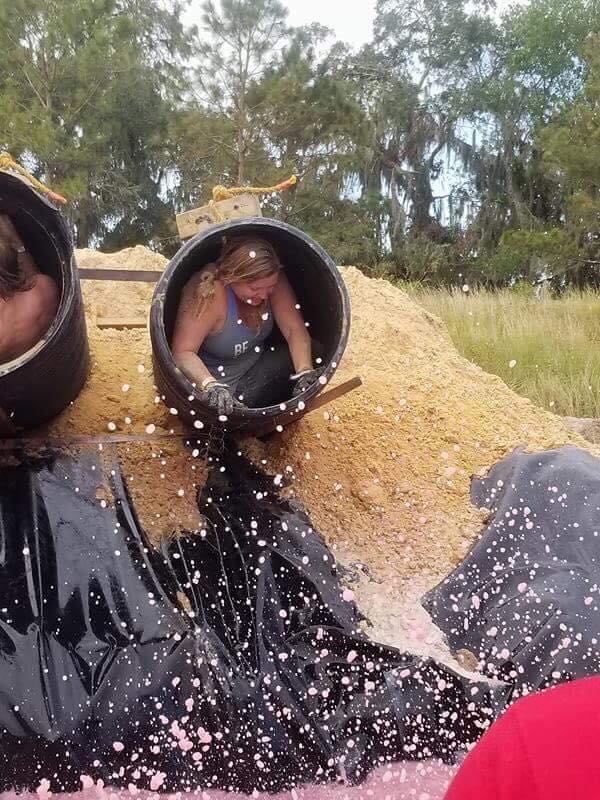 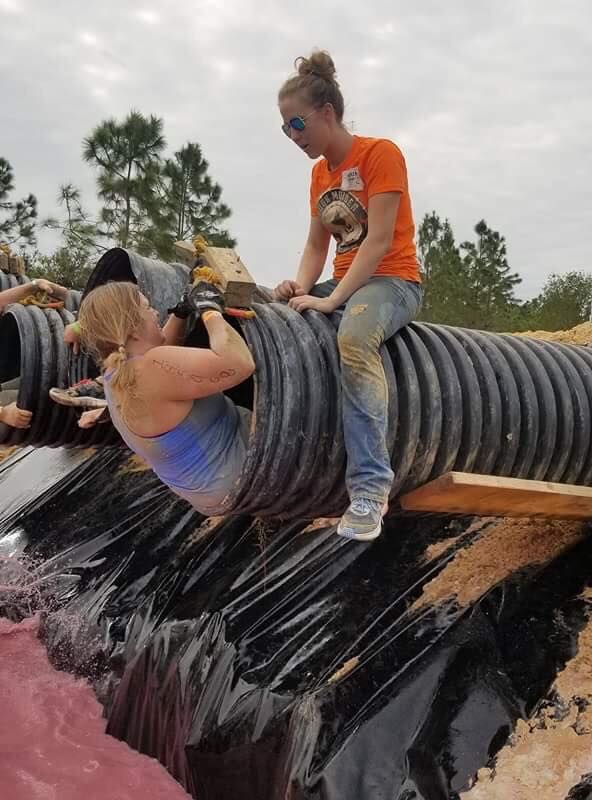 I skipped the next obstacle, Ladder To Hell. My shirt legs made this wall feel impossible and since I was soaked from that nice splash I made at Shawshanked, my feet slipped on the boards when I attempted it. I had no shame in walking around that one.

Next up was Hero Carry, where we partnered up and Mike carried me on his back. Honey’s shoulder took a turn for the worse on this one, thanks to my holding on for dear life.

I took a pass on the next one, Skidmarked, an angled wall (towards you not away) to climb over. Mike also took a pass because of his shoulder.

Everest 2.0 was around the next turn and I immediately said NO. A slick 15′ wall, quarter pipe, to run up and get over. I could just imagine falling face first the second my feet hit the surface. I stood there for a good 10 minutes watching others do it. Some ran right up it like it was nothing and some ran for the assistance rope. I watched people fall and get back up and do it again. I finally decided to just go for it. I ran, held my breath when my feet hit the wall, reached the rope, and pulled myself up. A couple of guys at the top who made it there before me, helped pull me up and over. I climbed down the other side, so darn proud of myself for doing what I was so quick to say no to. This was my proudest obstacle on Saturday.
We walked through more mud and came upon Birth Canal, low to the obstacle you have to crawl under. Big plastic bags filled with liquid are pushing down on you as you crawl. This one was tough, you had to push your way through it. We did it and went on to the next.

I skipped Balls To The Wall because the wall was really tall and you had to use a rope. I was pretty beat at this point as we were coming up on the halfway point. Arctic Enema was next. Mike and Erika did this one without even thinking about it. I struggled with the ice cold water taking my breath away when I hit that water so I shamelessly passed it up.

There was more mud and water to walk through, some deep and some shallow. We had to carry logs at the Hold Your Wood obstacle. The Reach Around was another climbing one that I passed up. Swamp Stomp brought more water and mud at what was our deepest water to walk through yet. It was up to my neck. All I could think about was a snake or something brushing against me and you would have seen me walk on water to get out of there. But I did it. Another proud moment.

Obstacle wise, I was done at this point. My feet were so sore from walking through mud, on uneven ground, running through sand, and more. I didn’t have it in me to climb anymore walls, walk through cold deep water, or even attempt monkey bars. I also walked around the very last obstacle, Electroshock Therapy. It was raining at this point and something about being shocked with my feet in water while it was raining did not sound fun. I had lost the ability to move fast at that point.

Do I wish I could have done more obstacles? OF COURSE. Am I proud of the ones I did? ABSOLUTELY! It’s like running a race and knowing you could have given it a little more and run faster or finished stronger. But all things considered, I am very proud of what I did. 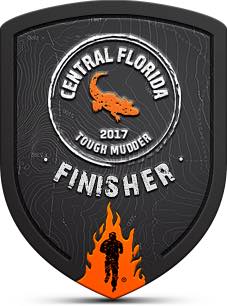 That night and the day after I was SORE. I had bruises under my arms from climbing, my feet were sore, my muscles ached including the ones I didn’t realize I had. Five days later, I am still feeling it.

And because I did the Tough Mudder, I think YOU SHOULD TOO! You can save 15% on any Tough Mudder Half or Full event with discount code ToughMudderBlogger15 through the end of 2017.

Have you done a Tough Mudder before? What was your proudest moment?

2 thoughts on “That time we did the Tough Mudder…. (and a discount!)”