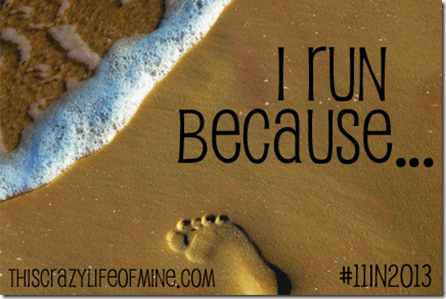 With the Iron Girl this weekend here in Clearwater, I find myself in the midst of yet another race week and as with every other one I’ve done, I’m so excited. In all honestly, I didn’t think this type of excitement would go on forever. I figured the first few races would and then the excitement would die down a little. That is so not the case for me.

The Iron Girl Half Marathon will be my 6th event for the year and my third half marathon. Who am I? When did I become this person who loves to get out there and run and sign up for races? Years ago, if you had asked me to run, I would have laughed. I swore the only way I would have run was if I was being chased. I used to be a walker, I would walk my heart out 5 days a week. I enjoyed it and it was what I needed at that time. In 2006 I temporarily became a runner. I was losing weight and it was easier to run. I eased my way into it and realized I could do it. But it wasn’t the same then as it is now. I didn’t crave it, I never signed up for races, and I didn’t feel the need to talk about it all the time.

In 2011 I jumped back into it, completely out of shape. It became my therapy and for the little bit of time I was able to do it, I enjoyed it. I slowly worked my way back into it. At the end of 2011, I decided it would run a race. I had no idea that it would lead to this.

I signed up for a small local 5K with my friend Terrie and we did it together. I huffed and puffed my way through it. This was weeks leading up to the Rock N Roll Half Marathon, which Terrie was also doing and we were spending most Saturday mornings walking together to get ready. Neither one of us was prepared to really run it, we just wanted to finish it.

I will never forget my first half marathon. I was all kinds of nervous the morning of, wondering what the heck I had gotten myself into. But I got totally wrapped up in the excitement of it and gave it my all. Somewhere along the way, I knew I wanted to run more of it than I thought. I finished 19 minutes faster than I guesstimated I would, cried I don’t know how many times during the race and as I crossed the finish line, and I don’t think I have ever been so proud of myself as I was at that moment. I was in pain, I hurt so bad, and I was already wondering when I could do it again.

My next race was just three weeks later, the Gasparilla 5+3K, also with Terrie. I loved that we were doing these together and cheering each other on. I was just as proud of her as I was myself. It was another great event and I knew that I wanted to do another and do better.

In the fall, I did my first mud run ever and my second half marathon, after dealing with sciatica. It had been my goal since the minute I crossed the finish line of my first half, to beat that time at my second. That didn’t happen but I was just so proud that I finished after being injured. I was also happy to know that the thrill of doing a half was still there.

2013 started with the Glow Run 5K and the Best Damn Race 5K (on my birthday!). Then I came full circle, running the Rock N’ Roll Half Marathon again. This year, I was determined to set a PR, and I did. More excitement, more living in the moment and being so proud of myself. I did the Gasparilla 8K again this year, and then I was randomly signing up for the Sarasota Half Marathon because of the amazing dolphin medal. Oh yeah, and this one had a bridge. Days before, I told hubby that it was just my goal to finish, that the bridge was really going to mess with my time and I’d be lucky to get in under the 4 hour time limit. I never in a million years expected to PR at that race. Never. Another proud moment, more crying, this time with less pain afterwards.

And now here I am, just days away from my 5th half marathon in just over a year. Still just as excited as every other one. And this one I’ve actually put some training in for, running the bridges a couple times a week, determined not to let those bridges get the best of me on race day. Hubby has been a trooper, keeping me company and pushing me a little more and more each time. 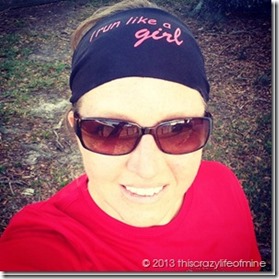 Slowly but surely I have convinced myself that I am a runner. I. Am. A. Runner. No, I don’t run a 10 minute mile and no, I don’t run the whole time. But I’m getting more consistent with my pace and I’m running more than I walk. I am tackling the bridges to prove that I can. I’m getting stronger and better. And I couldn’t be more proud of myself. 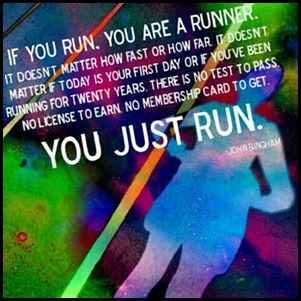 After Sunday, I’ll officially be an Iron Girl. I’ll also be a Half Fanatic for having completed 3 half marathons within 90 days. It’s a wonderful thing to be proud of yourself, and most of all, it’s a huge motivator to keep going…

Why do you run? What motivates you? Tag #irunbecause and share!