My love of running has grown the past week. Ever since the horrible events at the Boston Marathon last week, I have been glued to the TV waiting for the evil to be caught. Friday night I swore I wouldn’t be able to sleep until they caught suspect #2. Minutes after stating as much on Facebook, they caught him. I was so stressed for all of Boston. I can’t imagine being in a city that was locked down for a whole day. We should not live in a world where an entire city has to be locked down. That is not what this country is about.

Hubby and I went running Sunday morning, simply because we could. We went to Memorial Causeway in Clearwater and ran the bridge all the way over the causeway to the beach and back, a total of 4 miles. It’s a beautiful run. I am constantly reminded how lucky we are to live in such a beautiful, scenic part of Florida. It was a nice run, we ran a lot of it and most importantly, I ran all the way over the bridge both ways. It may seem like something small, something that shouldn’t be too important. But it is, because I can do it.

Yesterday afternoon, I was headed home shortly after the moment of silence for Boston. Still very much on my mind, I knew I was going to run when I got home. I had to show my support since I knew so many other’s would be doing the same. I was going to run 2.62 miles because it seemed like the perfect distance to run, but when I hit 2.50 miles, I knew I wasn’t going to stop at 2.62. I felt too good to stop, so I decided to run a full 5K. How often do you set out to run and decide you want to run further? I will be the first to admit that I rarely do this. I am usually happy to get through what I can. But not yesterday. 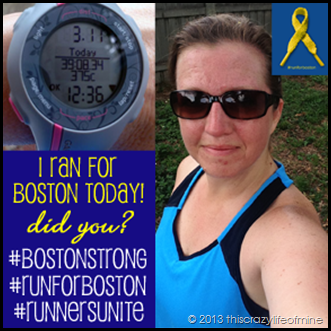 3 thoughts on “Have you run for Boston?”