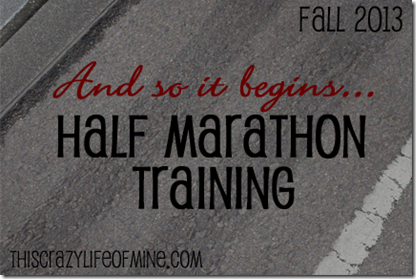 With my next half marathon coming up in November – the Women’s Half in St. Pete – I have been thinking a lot about training. It will be my sixth half marathon. For the five I’ve completed, I didn’t follow any specific training plans. In all honesty, I wouldn’t even say that I actually trained. I would run in the weeks leading up to each one (except the Women’s Half last November which I did coming right off my sciatica ordeal) but there was no rhyme or reason to it, no cross training, and I wasn’t increasing my mileage each week.

After finally breaking that 3:00 mark for my last two half marathons and now doing much more running and just a little walking, I would love to actually train this time and see if I can finish between 2:30 and 2:40. That would make me so happy.

Also, if I have any hope of working my way up to a full marathon, which will absolutely require structured training, I figure I should at least make it through training for a half marathon.

I’ve been looking over different training plans and some – many – seem so complicated. I want to know how long or how far to run each day, do a little cross training, and 1 long run per week. I also need to be able to plan it around my schedule. For instance, most training plans suggest doing the long run on Saturday which won’t work for me because that is my WW meeting day.

With the current heat, I do all my running in the morning. Because of this, I have limited time for a run in the morning, so I can’t do any crazy distances during the week. One mid-week day would be fine for a longer run, I can make that work.

I have decided to do a plan based mostly on Hal Higdon’s Novice 2 plan. It’s a 12 week plan but since I am starting this week, I am adding 2 weeks to it. I will also do my long run on Sunday instead of Saturday. Using the 12 week plan as a base, I’ve tweaked it to fit my needs and schedule, and added 2 additional weeks to it. Coming off my 5.17 mile run yesterday morning, I am feeling pretty darn good about tackling those longer runs as the weeks go by. 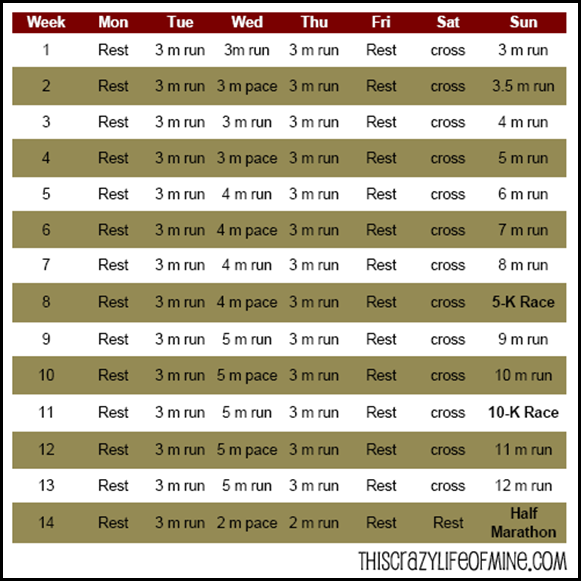 One thing that still may change is the suggested 5K and 10K races listed on Weeks 8 and 11. If races don’t fall during those weeks, I will just do it on my own – or see if I can gather a few running friends to join me.

I am super excited to get started. I like structure. It’s easier to know that I have a specific goal each day than to wonder what to do. Also, for each week, I will have the ability to switch around days if needed based on my schedule. if I need to work early on a Tuesday, I’ll run Monday instead and make Tuesday a rest day. This will be a great guideline for my goal.

I hope you’ll follow along with me a week at a time as I tackle this training. I may be crazy, but I am so excited that my next half marathon is getting closer. I have missed doing races over the summer and I long for the excitement of one.

How do you feel about training plans? Do you make up your own or follow a pre-designed plan?