It’s not often that there is a nighttime run. I’ve only done 2 the past couple of years, but they are a lot of fun. Add in glow sticks, fun lights, and running friends, and it makes for a fun night! I was excited to run the Electrodash 5K with hubby this past Friday night at the Florida State Fairgrounds in Tampa.

After fighting traffic from Clearwater to Tampa at rush hour, we finally made our way to the fairgrounds well before the start. We parked and made our way to the line to pick up our packets since we did not do so the night before. There was a delay getting in, but the weather was nice and cool, and it was fun chit chatting with others in line.

When we finally entered, we made our way to packet pick-up for our race bibs, shirts, and fun glow sticks including glasses. After we checked in, we walked around and I kept my eyes open for several friends (go Tampa Bay Bloggers!) who I knew were running this event. Caitlyn actually spotted me first. Since it’s now become habit to take pictures of us whenever we see each other at a race, we took another selfie. It’s what we do…. 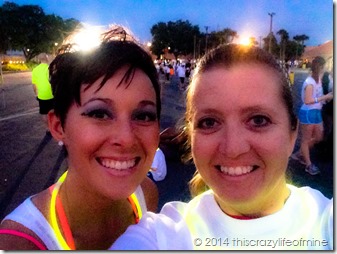 Our friend Xiomara found us, too. I was happy to see her, it had been quite awhile. We would also end up running together so we had time to catch up. Always fun to chit chat while running! Is it just me or do we look like Scuba Steve with these glassed on? Too fun! 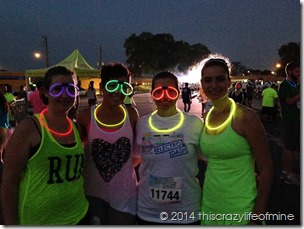 The event was to start in waves, but it seems like everyone started at one. It was dark, all the cool lights were on, and we were off!

We made our way through several zones of lights and music. As with most races, it’s a little congested at first but then it spreads out. They handed out water around the mile mark.

I was very proud of hubby as he ran most of it! He is not in love with running the way that I am, but he wants to do it, and he did just that. He was ahead of me most of this one! 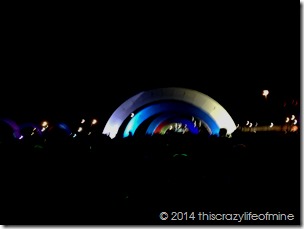 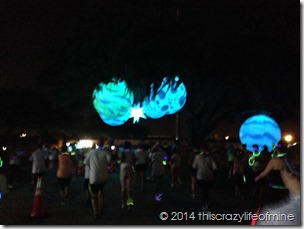 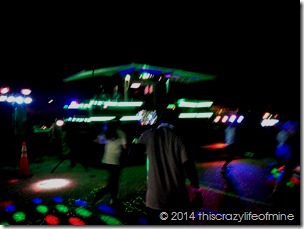 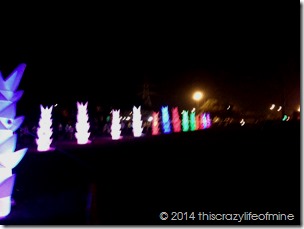 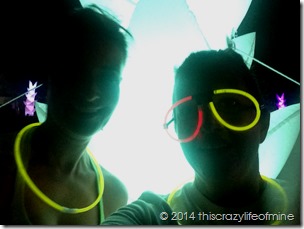 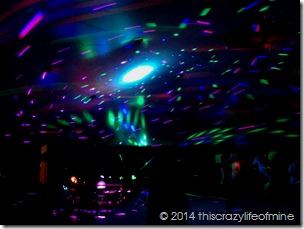 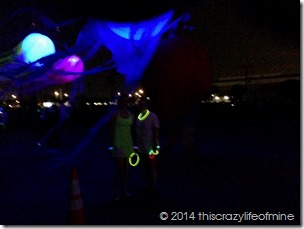 Before we knew it, we found ourselves back at the start line. They handed out water and granola bars. Everyone was heading back towards the stage for music and dancing at they finished…

One thing I really loved about this event was seeing all the kids that were there. They were having so much fun with the glow sticks and running at night.

Two things I wish… I know it was night time, so it was dark, and there were glow lights and effects along the way, but I felt like I was going to fall because I literally could not see the ground in front of me. I ran carefully the entire time to make sure that I didn’t trip on anything or step in a hole (like hubby did!). The only other thing is, I wish they would have given out a medal because I love medals! 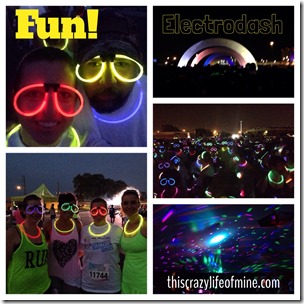 All in all a fun night. My time was around 34 minutes, which is great for a fun event like this. And it was fun participating with hubby and seeing my running friends.

Electrodash is in many cities across the US this year. Be sure to visit their website and see if they’re near you!

Have you participated in Electrodash, in Tampa or elsewhere? What was your favorite part?

Disclaimer: I received a complimentary entry to the Electrodash 5K in exchange for my honest review. The opinions shared are my own.

4 thoughts on “Friends, lights, and more at Electrodash 5K!”