Five half-marathons, two 8Ks, and five 5Ks later, I have found my inner #fitfemale. I have challenged myself in ways I never thought possible. I didn’t start running until I was 36 and that was only for a bit. I played tennis and softball when I was very young, but I never ran in school. I was in band which meant I didn’t have to take PE, which thankfully meant no running. I used to joke that I would only run if being chased and I bet even that would not have been very fast.

That crazy idea I had at the end of 2011 to run a half marathon changed me. I thought I was crazy for wanting to do it, it would be a one-time thing and that would be it. Running my first half marathon at age 40 in February 2012 just seemed like a fun thing to try. I never imagined it would be the experience that it was and that of all things, I would go and run for fun. Every race since then has been just as rewarding.

Running has become a necessity. Of course there are days where it’s the last thing I want to do. But I know that it’s exactly what I need to do. As much for my well-being and my sanity as my waistline and health. It has made me stronger in so many ways. It has become a huge part of my most recent Weight Watchers journey.

When you run a half marathon, or challenge yourself to run every day of the month, or do bridge training week after week, you realize how strong you really are and how bright that fire is inside of you. You realize that anything is possible. In a world that is full of drama, chaos, and uncertainty, it is one of a handful of things I can control.

I take away something good from every single run, even the hard ones. It’s an instant mood lifter, a huge boost of confidence, and it has the ability to calm my anxiety and nerves. If something is bothering me and has me feeling overwhelmed, a good run will suddenly make anything seem possible and manageable. I wish my inner #ftifemale was around several years ago when I had to take an anti-depressant, but that was another time.

Yesterday, I had a first. I went for my afternoon run, 2.06 miles. And this happened… I ran a 9:48 mile. I have never run that fast. I may not run that fast again tomorrow or the next day, but it’s just another reminder that anything is possible. 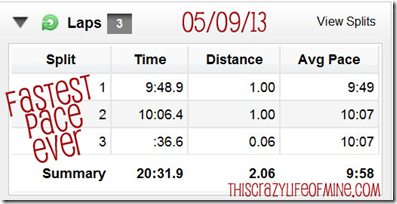 If you think you can’t run, you are wrong. I am proof of that. Throw on those shoes and go for a run and see how it changes your life. It has changed mine.

Have you celebrated your inner #fitfemale? Or is there an inspirational #fitfemale you’d like to share with me? Also, be sure to visit the Fit Female Campaign over at WomenRaces.com to read posts and share your own!

2 thoughts on “Finding my inner #fitfemale”