Now, that’s a sentence I never thought I’d say! Ever since I registered for the Space Coast Marathon, I’ve been thinking about the training much more than the actual race. Let’s face it… Running 26.2 miles scares the heck out of me, but I really think I’m more worried about the training part than anything. In 18 weeks time leading up to the actual marathon, I will run approximately 460 miles for training. My longest run will be 20 miles. I have never run a mile over 13.1 before.

To help with the enormity of all of this, I knew I wanted some advice on which training plan I should follow. And I knew exactly who I wanted to ask… My rock star runner friend Beth who blogs over at Discombobulated Running. She is also one of the first people I told when I finally decided it was time to do a marathon. Somehow she already knew I was going to do one and was just waiting for me to say something. This is why I knew Beth was the one to ask about training. 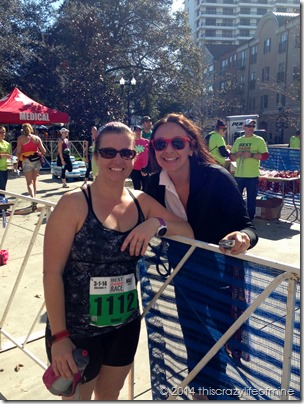 First and foremost, my goal for my very first – and possibly only – full marathon is to finish. I have 7 hours to finish and it just might take me all of that. I am not setting any time goals going into this because this is unchartered territory for me. I know that no matter how much training I do, there will still be walking.

Secondly, I am going to do everything I can to not get injured while training. I know the long runs are the most important aspect, so if I need to miss a shorter run during the week to be safe, I am not going to beat myself up over it.

Thankfully, Beth met me one morning for coffee to go over a couple training plans and she let me ask questions and she shared her advice with me. I know she’s not a coach or a professional, but she has been a big cheerleader in my running this last year, not to mention she has run a bunch of marathons herself and I trust her. Oh, and she’s also training for a full Ironman. Told you, she’s a rock star.

When I trained for the Women’s Half Marathon last fall, I modified and used one of the Hal Higdon plans. It worked well for me, I felt great going into that race, and I PR’d by over 20 minutes. So, I decided to look over his plans again and I printed out two of them to go over with Beth, Marathon Novice 1 and Marathon Novice 2.

She suggested, and I agreed, that I go with the Novice 2 plan because it has pace runs. She also suggested that instead of taking Mondays as a rest day, I switch Tuesday and Monday around and use it as a shakeout run, then rest Tuesday.

I will make a few tweaks to this plan, much like I did the half marathon training. All my long runs will be on Sunday instead of Saturday because that is my weigh-in day at Weight Watchers. I also need to get creative with the cross training, which I will do on Saturdays. Since I don’t swim or bike, this will be challenging, but I also know that T25 will help with this.

I also need to find a half marathon to do roughly half way through. Depending on what races are going on, I may have to adjust that accordingly.

Here is the Novice 2 plan as found on Hal Higdon’s site. I will do a separate post on my plan as I make it my own.

Another piece of advice Beth gave me is to make sure by the time I start Week 1 of training, I have built back up to that mileage. This will be important in NOT getting injured along the way.

Training officially starts the end of July. Between now and then, it is my goal to build back up to running 3 miles a few times a week and 4-5 miles on the weekend to build up to the Sunday long runs. I have not been running nearly enough because I’ve been so busy, but I want to make it a priority again. I miss it.

I am thankful for the running friends I’ve made over the last year and a half. I am not sure I could even think about taking on such a challenge if it weren’t for the inspiration I get from them. I am also thankful for hubby because he is there with me on his bike when I do long runs. I’ll definitely need that for this!