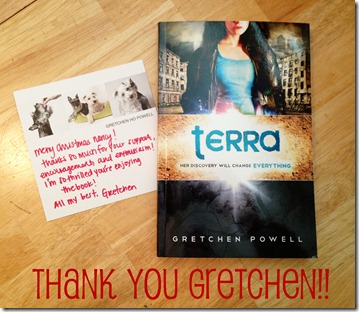 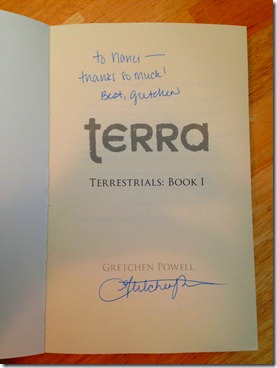 When a fellow blogger writes a book, you have to read it. Especially when she starts a second blog about the writing of her book and self-publishing, and you get more and more excited about it as she gets closer and closer to publishing it. So, when it was released on Amazon on December 11, I immediately downloaded it on my Kindle, anxious to read it.

And when your sister-in-law, asks you to write a guest review for her fabulous YA Lit review blog Making The Grade, you jump at the chance. I am happy to share my guest review with you here…

Gretchen Powell has written her first book titled Terra, a YA dystopian book about a girl, her brother, and their life in Genesis X-16. Terra’s life is changed forever when a discovery leads her to a world she never thought she would be a part of and a boy named Adam who is unlike any other she’s ever met.

I love this book. From the beginning, I was hooked. The characters are real and likeable, and a perfect fit for the world that Gretchen has created. I was held captive by the entire story line – the interaction between Terra and the government was as enthralling as that between her and Adam. And the odds they face are unimaginable… Acid rain that keeps them inside for days, a quarantine line that can’t be crossed, and meals that come in pill form.

I admit that there are some dystopian novels that I just cannot get through, the characters and worlds that the authors create are far too complicated. Not the case with Terra. And while I can never imagine living in a time or place where the government has divided the people so far, or where I would have to go out and scavenge for recyclables in exchange for currency to live off of, Terra is very easy to empathize with because her character is so REAL. Forgetting about the futuristic theme of the book for a moment, Terra struggles with loss, fear, and desire. Real qualities.

Terra can be compared to the likes of The Hunger Games and Starters. Gretchen Powell can absolutely hold her own in the YA world and will go far with Terra. There is no doubt that I want – and need – to read more. I cannot wait for the next one. In the meantime, I am sure I will read this again and again.

Terra is available on Amazon (Kindle and paperback) and Barnes and Noble (Nook).

For more on Gretchen Powell, you can follow her on:

Honey, I Shrunk The Gretchen