I was recently going through some photos, a trip down memory lane, and I came across my before and after photos from the very first time I did Weight Watchers. After hitting my goal and making lifetime in 7 months with a 30 pound loss, I made a little photo album of my success. Why I ever put the photo album away makes no sense to me because it should have been kept out as a reminder of how far I had come, and how I never wanted to go back that place before. Ironically, not only did I go back to that place, but I went even farther, as you know since I revealed my starting weight in Saturday’s weigh-in post.

To date, there are two times in my life when I have lost a lot of weight. Back in 1997, I lost 43 pounds strictly eating low-carb, going from 173 pounds to 130. I will never ever do low-carb again. Yes, it worked, but I was miserable. I’m Italian, I can’t give up entire food groups. The whole theory of telling me I can’t have a certain food just does not work and I am not sure how I did it back then.

By the time I joined Weight Watchers in January 2006, I was 156 lbs… Not to discount any of the hard work I have ever done to lose weight, I almost have to laugh at the fact that I was so unhappy at 156 lbs.. What I would give to weigh that now. But, there is no sense in going there. Everything happens for a reason and if I felt strongly enough about it at the time, then it was important that I do something about it. And Weight Watchers is a FANTASTIC program, I can never say enough about it.

What prompted my decision to join Weight Watchers in 2006 was seeing a photo of myself. When I first put saw it, I put it away. Months later it came out again, and within weeks I joined Weight Watchers. This is the picture… 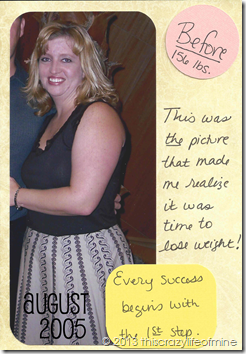 Worst photo ever, I thought. That can’t be me. There’s no way. I can’t even stand looking at it. And off I went… At the time, there was a Weight Watchers in the shopping center around the corner from our house, right next to the Publix we shop at. Talk about accountability. I knew it was right for me the minute I walked in. Everyone was very welcoming and the meetings were great. No one was telling me I couldn’t eat pasta or bread. Getting on the scale every week was enough of a motivator for me.

For 7 months, I went to meetings, followed the program, and stuck to the points like my life depended on it. I never felt deprived. I worked out. Hard. Often times, twice a day. I did TaeBo and turned my walks into runs. I was a machine. Shortly after making Lifetime, I took a new picture of myself. 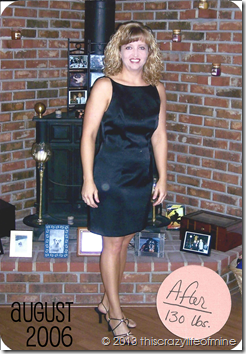 Quite a difference. I was so proud of myself. I went from a size 14 to a size 6. I felt much better that time around than when I did the low-carb diet years before. Amazingly, shortly after hitting goal, my family opened an Italian restaurant and for much of our time there, and I STILL kept the weight off. I would allow myself one day a week to have whatever meal I wanted (and would make it myself since my mom and I were the cooks!).

So here we are, 2013 and I am working the program again. Three weeks in and I am down almost 8 pounds. It’s not all going to be easy and I will have a week where I gain. It happened the first time around, I know it will happen again. But I am not going to give up this time. I can’t keep giving up. Starting this time around 22 pounds heavier than the last time is just not acceptable. I’m not going to keep asking myself how I got to this place, how I let it go so far because I wasn’t ready before. It wasn’t the right time. I wasn’t mentally prepared to tackle it. But I am now, and that’s what’s important.

I have a new before picture picked out for this time around, this one from New Years Eve, the day before I went back to Weight Watchers. I was not comfortable in my dress, but I wore it anyway because I wanted to dress up. Here it is…

I can’t wait to be able to post an after photo. I want to dress up comfortably. I don’t know how long it will take, but it will happen. I will get there – you can #ExpectAmazing.

Do you take before and after photos as part of your weight loss journey?