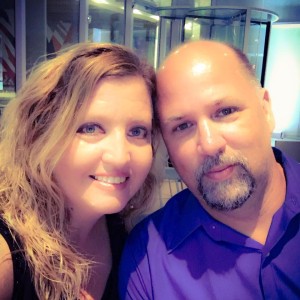 A little about me… I am a 40-something wife, daughter, sister, aunt, niece, friend, and dog-mom. Hubby and I have been married since 2001 and we have two wild and crazy Australian Shepherds who keep us very busy. 🙂

In 2006, I joined Weight Watchers and in 7 months, lost 27 pounds and reached my goal, becoming a lifetime member. I was at 130 pounds, what I like to call my happy weight. It is my happy weight because I am the most comfortable in my skin and my confidence soars. I promised myself that the changes and healthy habits I learned in WW would stay with me forever, and I would never again get up to the 157 that I started at. Boy was I wrong…

Shortly after reaching my goal weight in July 2006, we decided it was time to start a family, five years after getting married. This coming from two people who adamantly said NO KIDS for a long time… I went off the pill and five months later, was ecstatic to be pregnant. (I will note here that during that five months of trying, my weight stayed at goal, never changing thanks to my continued healthy habits and working out.) Our excitement was very short lived when I had an early miscarriage. It knocked me to the lowest of lows and I knew that day that we had experienced something that would forever change our lives. We waited a few months, during which time I did my best to heal physically and emotionally. We started trying again, with no luck since. Not even another pregnancy, not one since 2007. I’ve been poked, prodded, medicated, multiple surgeries, and lots of technology (one round each of IUI and IVF) to try for that elusive pregnancy that seems to happen quite easily for everyone else. It was later in 2007 that the pounds starting creeping back on. But the emotional rollercoaster of infertility was in total control of my body, heart, soul, and mind. Those healthy habits I coveted for so long were thrown away – it was one thing too much for my broken body to do.

At one point in 2009, I went back to WW briefly. It lasted a few weeks before I gave up, not able to give it my all.

2010 proved to be a harder year than the others. Being a small business owner, we hit rock bottom when the economy crashed and in November, my dad went to the hospital for a pain in his side. He ended up needing surgery and that became another very defining moment in our lives. He spent a total of 4 weeks in the hospital before passing away on December 4. The pain of a miscarriage didn’t come close to losing my dad and again, our lives were changed forever.

After he had been gone a few months, I realized I had to take better care of myself. I knew, without getting on a scale, that I weighed more than I had in many, many years. I needed to do something not only for my health, but to keep me busy, to keep my mind from wandering and wallowing in the sadness of losing my dad.

I remember how proud my dad was of me the first time I did WW. Every week, he was excited to hear my progress and he was so impressed at how I became the master of eating healthy and still enjoy foods I love. For a minute, it saddened me that he would not be here to cheer me on this time around, but I knew he would still be here with me, every step of the way. And that realization, knowing that he would be watching me from above, my guardian angel, pushed me back to WW.

I went back to WW on March 11, 2011. Again it would prove to be a challenge for me given my schedule, responsibilities, and more. In September 2011, I stopped going, but not without a lot of frustration and feeling like I was letting myself down.

2012 was the year that I turned 40 and it was quite the challenging year. I fell in love with races, despite being a “slow” runner and having to walk most of the time. I did my first half-marathon, an 8K, several 5Ks, and even did a second half marathon.

On January 1, 2013, I went back to WW. I know, I know… Again? It was a last-ditch effort to get things under control, but I am currently down almost 30 pounds. I credit both Weight Watchers and running.

2014 will be full of running as well! I completed my 7th, 8th, 9th, and 10th half marathons AND I registered for my first FULL marathon which I start training for in July. I am still doing – and loving – Weight Watchers. I completed my one-and-done full marathon in November and will forever be a marathoner. Even if I never run another one

The story of me is always changing. I am constantly trying to be a better person. Anxiety and depression are real and here in 2017, my weight is at it’s highest ever. But, hubby and I started the year by joining Golds Gym and signing up for a 12-week challenge which includes bootcamp 3 days a week.

I am very lucky to have the support of my husband through all of this. He is amazing and is my rock.

So, how did This Crazy Life of Mine start? In Feb. 2011, after being a blog reader for awhile, I realized I wanted to be a blogger, but for myself. I needed an outlet, a place to journal. Starting my blog has been one of the best things I’ve ever done. Without it, I may not have fallen in love with running as much as I have, and I am certain I would not know all the wonderful bloggers I have gotten to know through blog events and social media. The blogging community is absolutely wonderful and I feel very lucky to be a part of it. What started so small has continued to grow and this little space I occupy on the internet has become an extension of ME.

I hope to get to know more of you over time and that you will follow me on my journey!