Last night, hubby and I went to Busch Gardens for Howl-O-Scream. It was the first night of this yearly event, one that we have actually never been to. I couldn’t believe this is the 13th year and we were just now going. We’ve tried in years past, but traffic was always an issue. How did we manage to get into the event last night, the first night? It was a Yelp Elite event! Just a few weeks ago, I was invited to be a part of the Yelp Elite squad after posting reviews and tips on the Yelp website, and checking into places I frequent.

We were the first to arrive and check-in and were give our VIP passes (which would get us into the haunted houses quicker), a cool bag, t-shirt, and drink coupons. 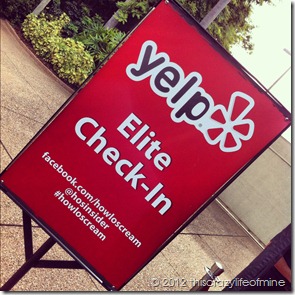 We made our way to the Pavilion where the food and drink were. Very quickly the room filled up with other Yelp Elites, VIPs, media, guests, and more. Hubby and I started by grabbing an ice cold Bud Light from and then we sampled the delicious food. I had chips and salsa, crab stuffed mushroom caps, caprese salad (the mozzarella was AMAZING!), hummus and warm pita bread, bacon-wrapped scallops, cheesy potato casserole (my favorite!), and deviled eggs. 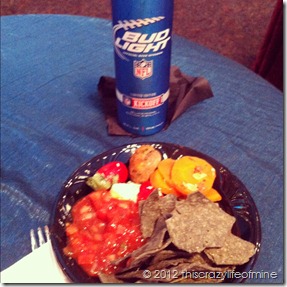 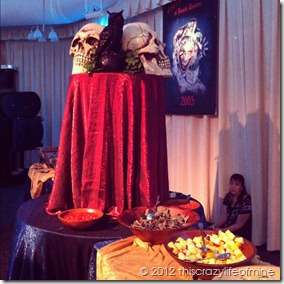 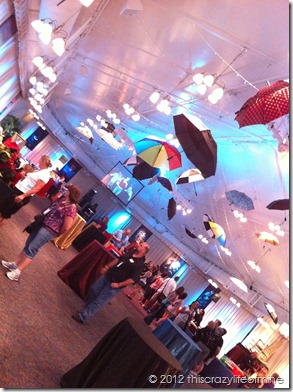 After eating, we walked around and I kept my eyes open for Grace from Grace Dishes, a fellow blogger who I knew was going to be there. I spotted her and her boyfriend at the dessert table. It was so nice to meet her and the four of us chatted for awhile. Thank you, Grace, for sharing the photo! 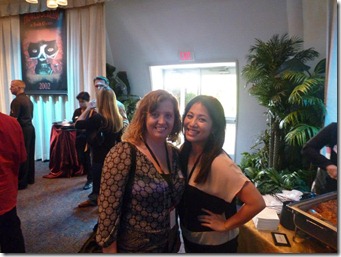 There was also a Yelp tent outside the pavilion, where there were more drinks and a fun sitting area. 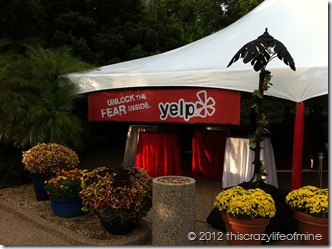 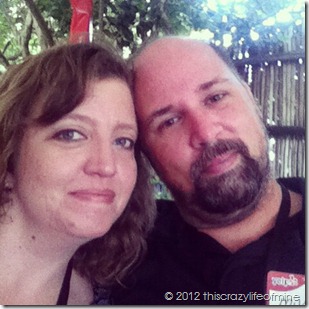 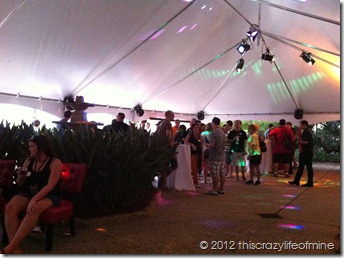 I also ran into Meghann from Meals and Miles and we chatted for a few minutes. By the way, Meghann, your new camera took a great picture! Thanks for sharing!

It’s fun to meet and talk to people that I would probably never know if it weren’t for my blog. And then finally, it was time to hit the haunted houses. The first one was just a few steps away, and wouldn’t you know it, in those few minutes, it started raining. 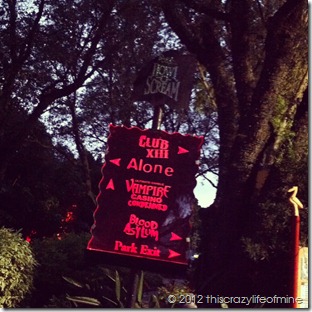 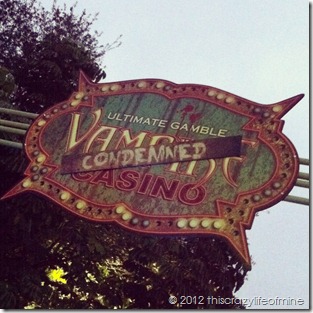 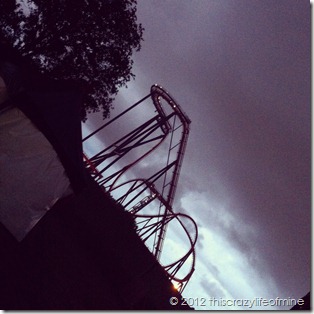 When we came out, the line had cleared out and it was still pouring. Making our way back to the pavilion, we saw that everyone was under cover. Smart people! So, we went back inside the pavilion to hopefully wait out the rain, grab a couple ponchos (albeit a little late for that!), have another drink and some more yummy food. We also ran into Brett, the community manager for Yelp Tampa Bay, and we chatted for a few minutes. he was amused that we were carrying ponchos, still in the wrapper, and we were soaked. 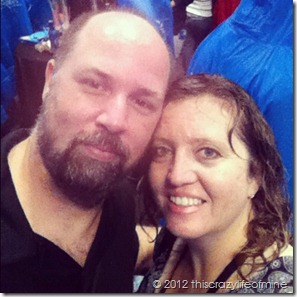 I also took a few minutes to take a picture of our cool VIP lanyards. It’s nice to feel special. 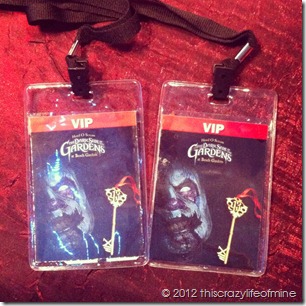 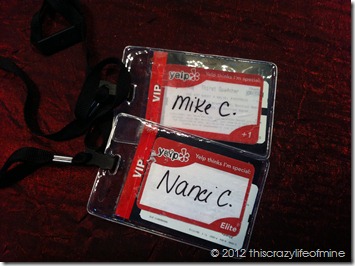 Do you notice the irony in this next picture? A room full of people, soaked from the rain outside, and there are umbrellas hanging from the ceiling. I had a good laugh over that one. 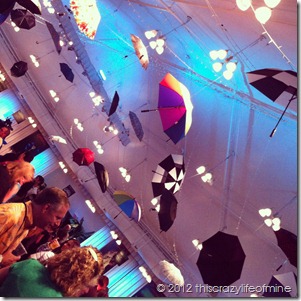 We put on our fun ponchos and headed back out into the rain, determined to hit more haunted houses. Next stop was Night Shade Toys. Yea…. This one was creepy. At one point, we walked through a room that had the walls covered with stuffed animals and while I can’t be certain, I think there may have been real people in the mix. It. Was. Creepy. I now have to get rid of any stuffed animals I have in the closet. 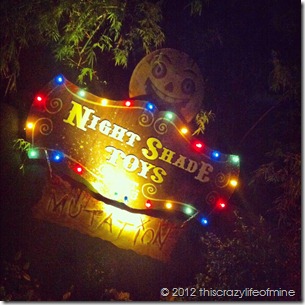 After that, we headed to Blood Asylum. It was crazy and bloody. And at one point there was a strange smell, but I have no clue what it was. I screamed several times in this one as well. Of course, hubby is always amused by my screaming and he says I just egg them on. He’s probably right, but if you scare me, I’m going to scream. 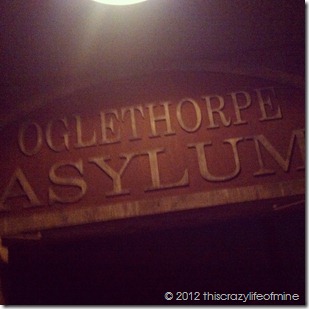 After Blood Asylum, we decided to head home. It was STILL raining. All in all, it was a great time and I am so happy to be a part of Yelp Elite and be able to enjoy such events.

If you’d like to read my review on Yelp for this event and other business I have reviewed, you can find them here.

Have you been to Howl-O-Scream at Busch Gardens? What kind of haunted houses scare you the most?

2 thoughts on “A rainy Yelp-O-Scream!”