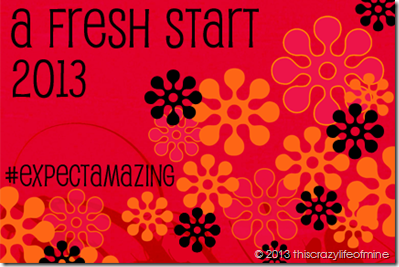 It seems like such a cliché to go on a diet on January 1st. How many people resolve to eat better, work out, and live a healthier lifestyle only to go back to their old ways within a few weeks time? Been there, done that.

I walked out of a Weight Watchers meeting back in April and never went back. Why? I had it in my mind that I could do it on my own, despite the fact that I’ve never had success with that before. For the remainder of 2012, I fooled myself into thinking it would all click, that one morning I would wake up and know exactly what to eat and what not to eat to magically lose the weight and never gain it back. If only it were that easy, right?

I have thought a number of times the last several months that I should go back to Weight Watchers, but I had an excuse not to every time. Not the right time, why set myself up to fail, I can’t do it, I can’t commit. Blah, blah, blah. Seriously, I am my own worst enemy when it comes to losing weight.

The beginning of December, a new Weight Watchers program was introduced. New look, new feel, new information. Part of me wanted to go running back to meetings at that moment to get all the new goodies that go along with a new campaign. But the little voice in my head told me I wasn’t ready.

A couple of fabulous women I follow on Twitter, discussed the new program quite a bit. One of them, Suzi Storm, a fellow blogger over at Ok, just one more beer…, has been a part of Weight Watchers campaigns before. In print, on TV, and more. She is a rock star. But she is REAL and has had some struggles this year. And while I am all for a happy-ending weight loss story, I am more inclined to forever follow the story of someone who has the same damn struggles that I do. It’s not always easy, no matter how fantastic the program is. Another blogger has written on her blog in great length about the new program, Mel with The Daily Mel, and I will be the first to admit that the information she gave nearly sent me running to the nearest meeting despite that voice in my head.

The last couple of days, that voice changed. It didn’t tell me I wasn’t ready when I thought of trying it again, for the FIFTH time, rather I had thoughts of succeeding. Of being able to deal with it better, to face it head on. So after a fantastic dinner at Kobe Japanese Steak House on New Years Eve, where I didn’t give a single thought to what I was eating or drinking, I told hubby that the next morning I was going to the 9:30 Weight Watchers meeting to start over again.

Despite the cliché of starting a new diet on January 1, I looked at it as a fresh start. New year, new goals, a chance to focus on ME. No more holidays to sabotage me, no more excuses. So, off I went yesterday morning to Weight Watchers in Largo, arriving just before the center opened.

After buying the new member kit in the fantastically cute bag, a salad bowl, and mini-bars, and signing up for the monthly pass, I got on the scale. This was the part I dreaded. Who doesn’t? I officially weigh 14 pounds more than I did at my last weigh-in back on April 5. I am at my heaviest ever. EVER. How did I get to this point? I know I’ve been through a lot, but my goodness, how did I let this happen? How?!

Despite the shock of the scale, I really enjoyed the meeting. It felt right. It did not feel forced or like I might lose interest tomorrow. I chatted up a storm and took part in the discussion and more. I stayed after for the first of two Power Start sessions. I left there feeling – knowing – that today was the right day to go back.

I KNOW that Weight Watchers works. I’ve celebrated making lifetime before and I kept it up for quite awhile. And yes, it pisses me off that I let life get in the way and derail me from the progress I made. I hate that I let circumstances get the best of me. But I cannot think about that now. All I can do is look forward and start today. I made the choice to go to the meeting this morning and commit to a healthier lifestyle and to the accountability that is Weight Watchers. It’s not a diet. It’s a lifestyle. It’s about change and healthy choices. If I want to make a bad choice, I can. I just need to be held accountable for it.

I will be 41 next month. I want to feel good in my skin and not constantly worry about what I’m wearing or how I feel wearing it. I know what it’s like to be on the other side of that, to not spend half my morning wondering what I will wear to hide whatever part of my body is making me the most unhappy that day. Not to mention, I am registered for five events between now and April – two half-marathons, an 8K, and 2 5Ks. I want to give it my all. Taking better care of myself, eating better, and doing anything I can for me (despite what is going on around me) is the goal for 2013. 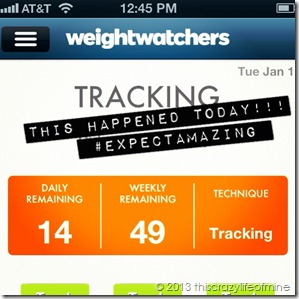 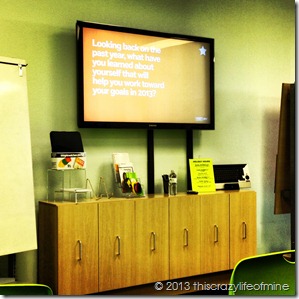 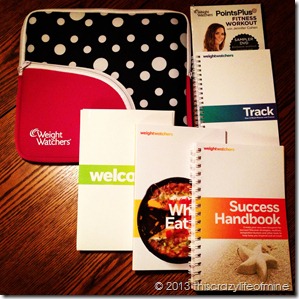 Do you follow Weight Watchers? Have you made weight-loss related resolutions for 2013?